It's only been a week since I last sat down to post a blog, but somehow it seems much longer than that, since I spent very little of the last week in the woods.  I was down in Mt. Kisco in Westchester County looking after my granddaughters while their folks were away.  The girls are no trouble at all to care for and lots of fun to be with, but their interests sure don't lie in accompanying Grandma on nature adventures.  I did manage to get out one day by myself to visit the wonderful Teatown Reservation, a nature preserve and education center in nearby Ossining.  I love to take the trail that circles the lake that lies at the heart of the preserve, and I had a beautiful blue-sky day to do it in. 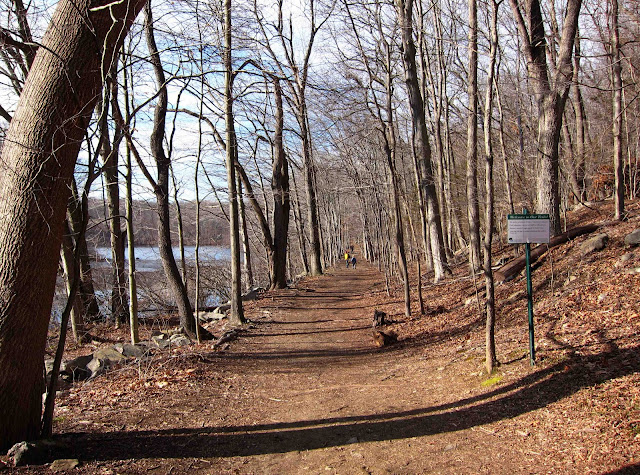 At one point, the trail passes over a very long footbridge that provides beautiful views of the lake, which was mostly covered with a thin sheet of ice.   I walked this trail just a year ago, when several feet of snow covered the woods, and the ice was thick enough to support the wanderings of deer across its surface.  They would not have been able to do that today.  (To compare the amount of snow this year to last at Teatown, click here.) 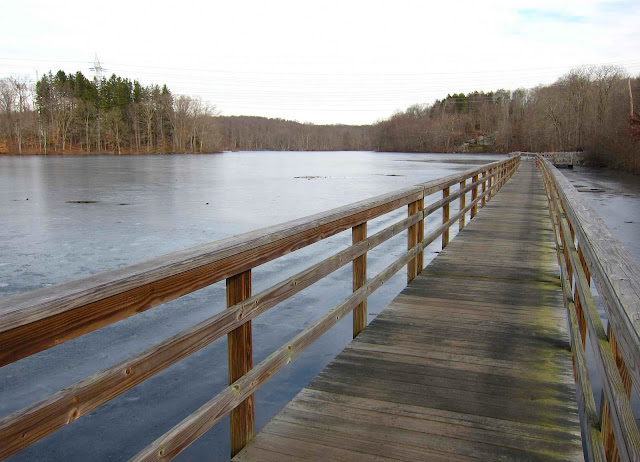 The terrain surrounding the lake is rugged and rocky, with many outcroppings studded with glassy patches of quartzite. 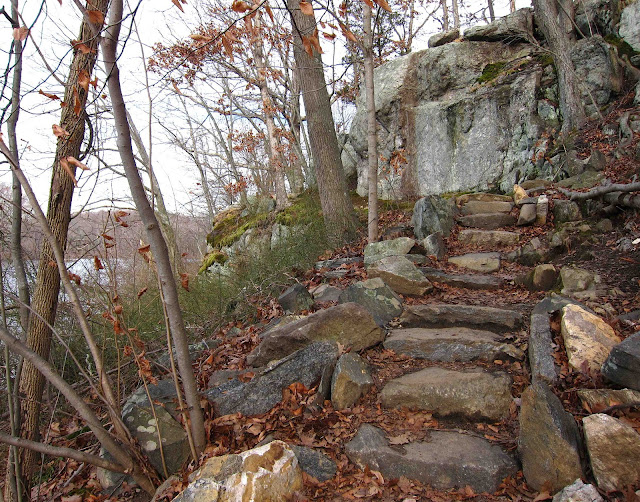 Wherever the lake lay unfrozen, various waterfowl swam about in the open water, including this pair of elegant swans.


Because of an overabundance of deer in Westchester County, most of the woods, although lush and green, are bereft of native species of plants, supporting only those invasive plants that deer avoid.  A number of nature preserves in the county are fencing off portions of their acreage to keep out the deer,  allowing the native plants to be reestablished.  At Teatown, this process is being actively managed, with removal of alien species and the planting of native shrubs and trees and wildflowers.  This rustic gate marks one entry into such a fenced-off exclosure.  I look forward to revisiting this area during the growing season to see what native plants have come into flower.


One of my favorite features of Teatown is the exhibits of native birds and mammals, especially the enclosures containing raptors and owls and other birds of prey, all of them having been rehabilitated following serious injury but too permanently damaged to be returned to the wild.  Here, one of the caregivers, Lisa, enters the enclosure of an American Kestrel to offer it shreds of meat.

Which the kestrel eagerly devours.  I think I would enjoy this job! 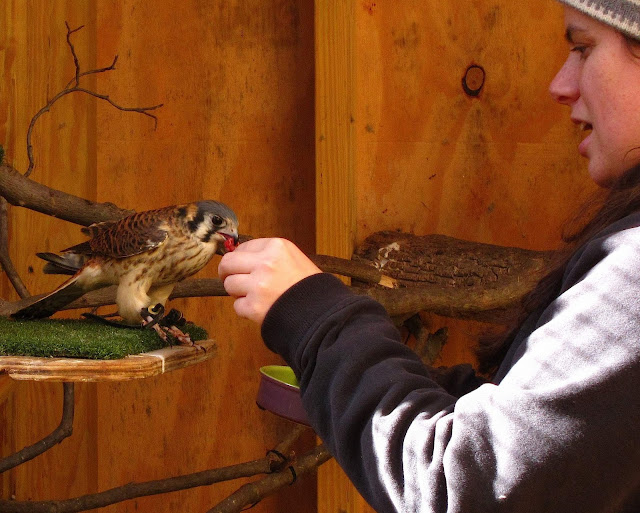 In a nearby enclosure, a Red-tailed Hawk hunches over to enjoy its lunch of rat.  How lovely to get such a good view of the ruddy tail that gives this large raptor its name.  We usually can only see this bird from underneath, as it soars above us, high in the sky. 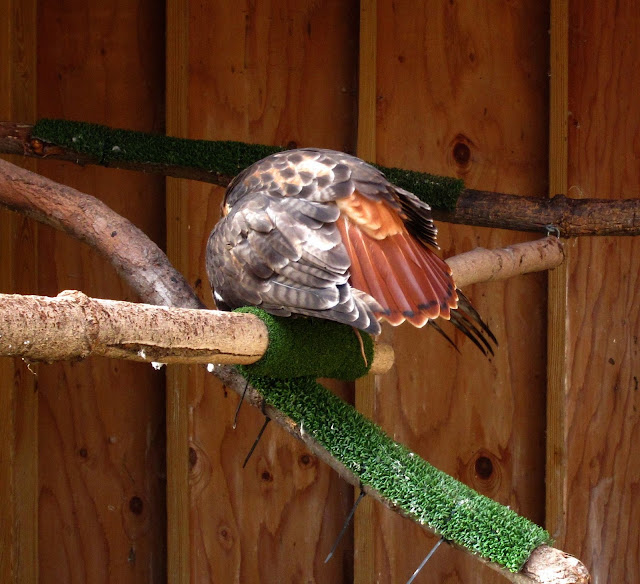 Inside the nature center are tanks and terraria housing a number of amphibians, snakes, and turtles, including this rare Blandings Turtle that came close enough to let me see its yellow chin and throat, and the distinctive black and white mottling of its shell.


An informative sign near the turtle's pool stated that this turtle is found in New York only in Dutchess County, but I was able to leave a message for Teatown naturalists, informing them that this rare turtle has also been found at the Wilton Wildlife Preserve and Park, right here in Saratoga County.  Where I am again very happily at home, eager to get back to my own Saratoga County woods and waters.
Posted by Jacqueline Donnelly at 8:11 PM

Nellie from Beyond My Garden said...

You had a nice journey through the Teatown Reservation. I especially love the gate. It has been especially warm here, too. I'm glad you got out at least one time.
nellie

Hi there! This is Lisa, the girl with the kestrel. It was so nice to meet and talk with you around the raptor loop. I have been enjoying your blog and hope to run into you again

Thanks for stopping by, Nellie. It was good to hear from you, and it gives my readers the opportunity to visit your lovely W. Virginia home and garden by clicking on your name.

Hi Lisa, thanks for taking the time to leave your comment. I had such a good time talking with you about birds, and it was a real thrill to watch you feed that kestrel. Such a beauty! Teatown is my favorite place to visit in Westchester County. Thanks for all you do to care for the critters.