Two clear cold, blue-sky, bright-sunny days in a row!  And with some nice fluffy snow in between.  Hurray!  As long as we have to have winter, we might as well have some real WINTER!  Happily for me, I was able to get out and enjoy it, both yesterday and today.  Yesterday, inspired by reports of eagles feeding along the Hudson at Ft. Edward, I headed over to Washington County to follow the river roads through Ft. Miller to Ft. Edward.  Well, I didn't see any eagles, but I sure saw lots of geese.  Wherever there was any open water, there were hordes and hordes of geese that never went south for the winter. 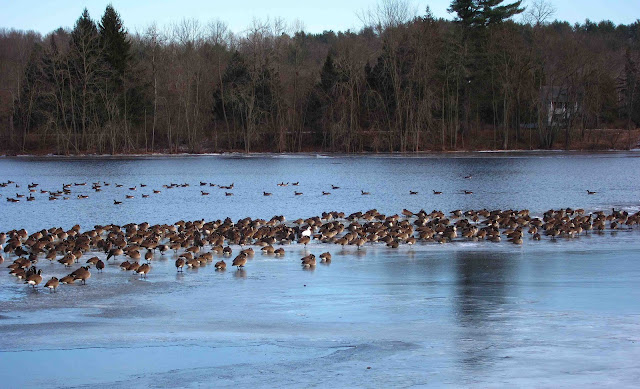 But hey, what's that snowy-white fowl out there in the middle of that flock of geese?   Looks like a barnyard goose has come out to visit his Canadian cousins.  Or could that be a Snow Goose?  I can't see its tail feathers, which would be black on a Snow Goose.  Usually, Snow Geese gather in large flocks along this stretch of the Hudson.  Do they typically mingle with the Canadas? 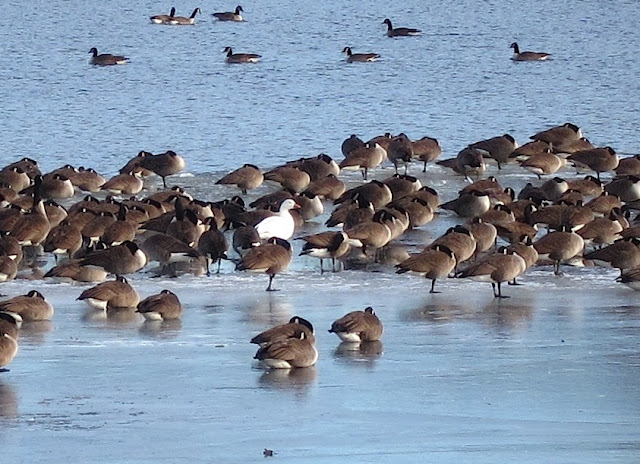 Today was even sunnier than yesterday, and what a dazzling sight it was, to see Moreau Lake all sparkling white from shore to shore, following last night's snowfall.  Most exciting, the "Thin Ice" signs were down,  so the lake was completely walkable, all over its surface.  I don't know how to explain it, but I always feel a certain thrill, walking across that wide-open frozen lake under that huge blue sky. 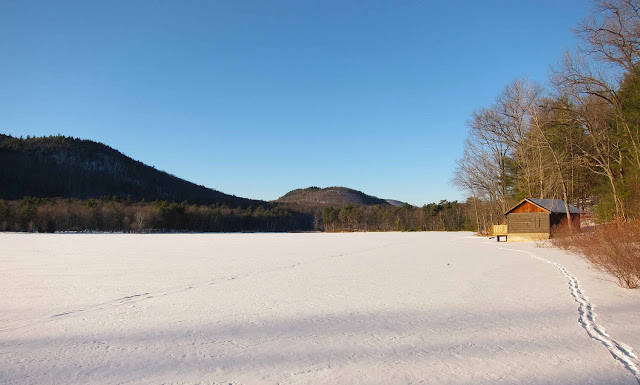 I stopped to chat with some ice fishermen, including this cheerful fellow named Vince, who had caught two beautiful Rainbow Trout.  Nice big ones, too.  See them lying on the ice in front of Vince.   I swear, it takes a special breed of guy to sit out on a windy cold lake all day long and insist that he's having fun.  I love the cold, but I have to keep moving in it.  Man, he doesn't even have GLOVES on! 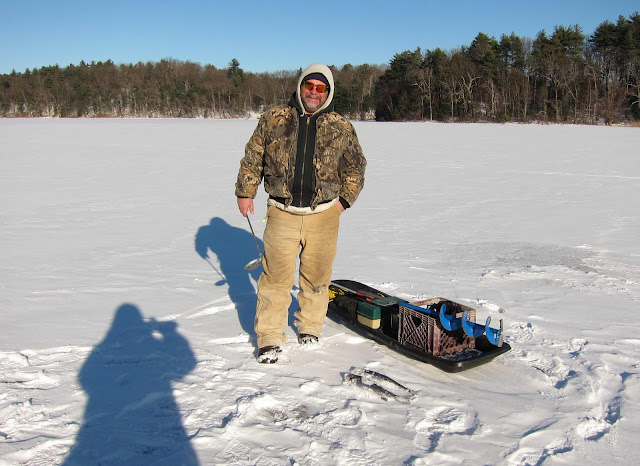 If I had to sit still on a frozen lake all day, I'd do what this fellow named Zach is doing, sitting nice and cozy inside a blind that keeps out the cold wind and keeps in the heat from a small propane heater between his feet. 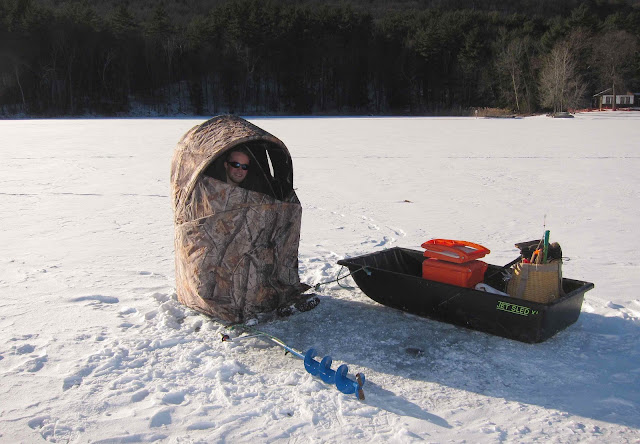 But then, wouldn't that make it all the colder, having to climb out of that warm cocoon to tend to the fishing lines?   I guess he must feel it's worth it, especially when a nice 18-incher like this one is tugging on the other end of the line. 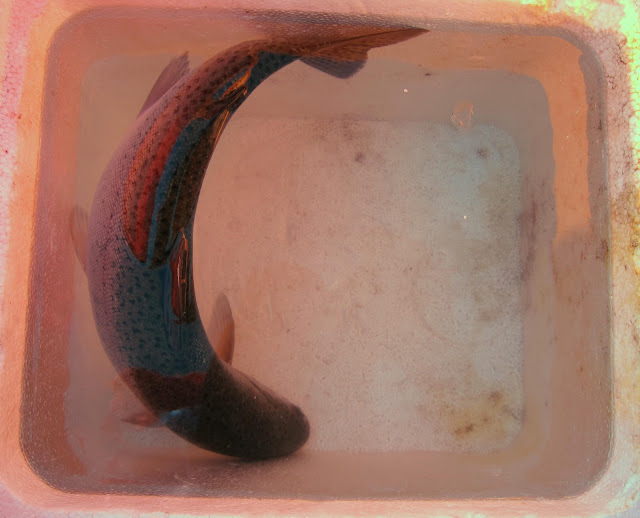 Posted by Jacqueline Donnelly at 11:53 PM

Beautiful, but too cold for me!!

Ooh, what a gorgeous fish! We are having an amazing number of geese still here as well. there is one white one among our lot, but it is just a snow. there is however, a grey barnyard style goose paired with a Canada that stays by the bridge all summer.

Aw, swampy, you get used to it, just gotta wear the right clothes. And lots of 'em. Nice to hear from you, thanks for stopping by.

You're right about those fish, threecollie. Wish I had the patience to fish for some for myself. Now that I look again at that white goose among the Canadas, I think it may indeed be a Snow Goose. I couldn't see the black tail feathers when I took the photo.