A Brief Paddle, A New Mushroom

A gorgeous blue-sky day today, and Sue and I wanted to paddle.  Rivers and creeks are too turbulent still, so Sue suggested the fen at Glen Lake, a beautiful wetland with meandering channels, resident waterfowl, and dramatic views of the mountains that surround Lake George. It sure looked lovely this morning, with baby Red Maples already turning scarlet and a noble Great Blue Heron there in its midst, adding his handsome profile to the scene. 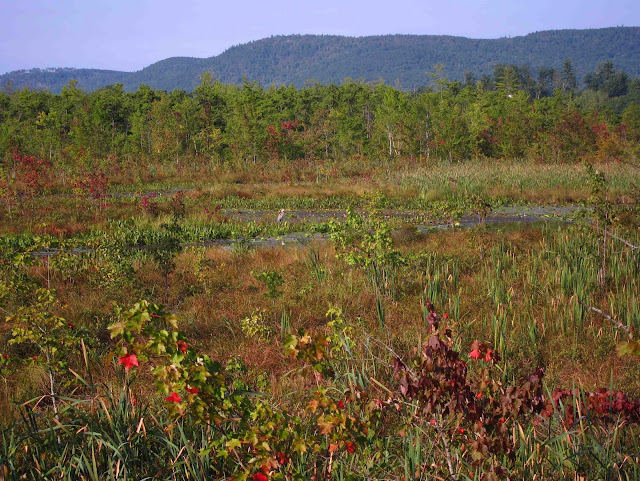 With all the recent rain, the water level in the fen should have been high enough to grant us access to its farthest reaches.  Well, we tried, as these upturned Water Lily pads attest, their red-backed leaves standing erect to mark where we paddled through them.  But we didn't get far.  The water was high enough, but the channels were clogged with so much Eurasion Milfoil we could only progress by poling and hitching.  It felt like trying to paddle through porridge.  No fun at all!  So we made our way back to shore and went for a walk instead. 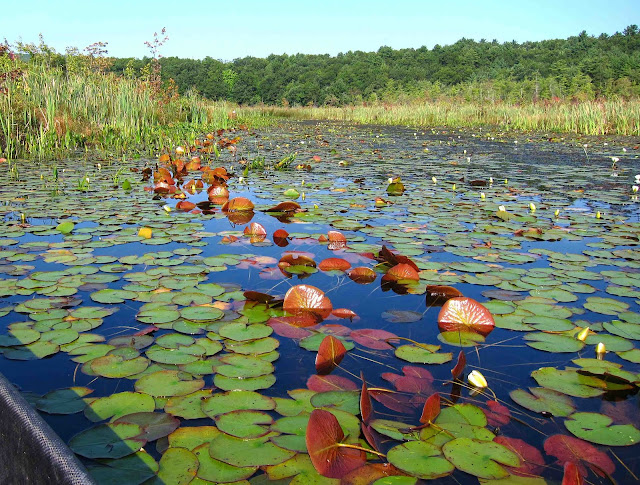 The fen at Glen Lake is bordered by the Warren County Bike Path, which runs from Glens Falls to Lake George.  We set out to walk along the bike path but soon left the pavement to enter a dark cool woods, where we found huge numbers of many different kinds of mushrooms.  Among the most brightly colored mushrooms were these chrome-yellow ones with slimy caps and with brownish flakes around the edges that made them look like little lemon pies.  They were vey numerous under stands of White Pine. 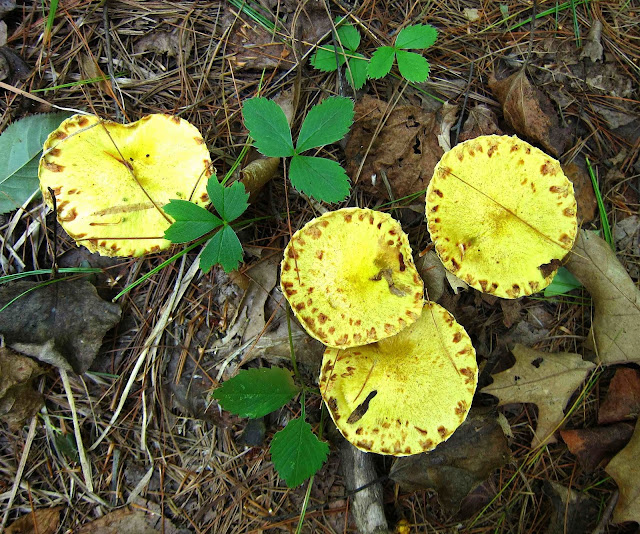 Curious as to what this mushroom could be, I bent down and picked one to examine its structure.  The first thing I noticed was the absence of gills and the presence instead of the distinctive pores that mark this mushroom as one of the boletes.  In this case, the pores were as yellow as the caps, and so was the stem. 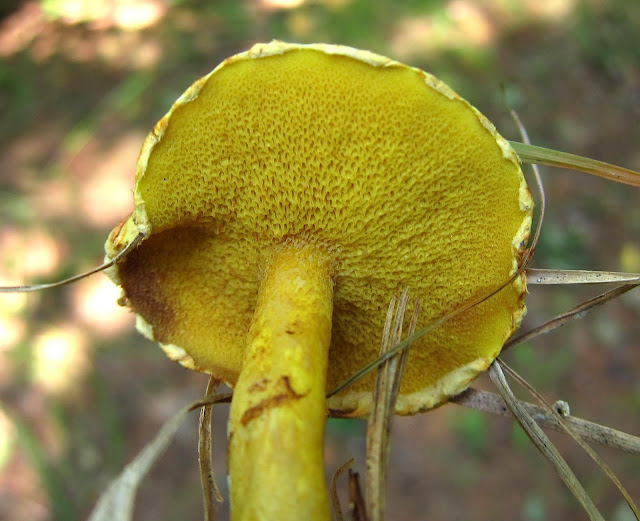 I next noticed that these yellow pores promptly stained brown where my fingers had crushed them.  My fingers also turned brown where they were slick from touching the slimy caps.  I noticed the mushrooms had a rather pleasant fragrance, so I wondered if they might be the kind of boletus that's good to eat.  Sue gave me a plastic bag from her pack, and I picked a nice mess to take home for positive identification. 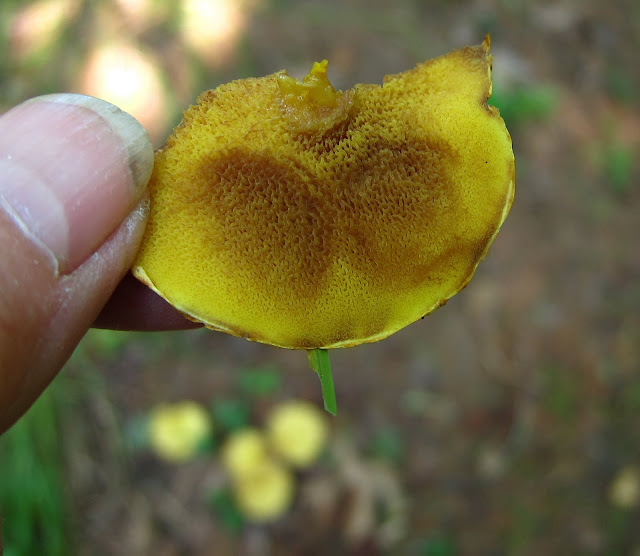 After searching all my mushroom guides and looking at lots of images on the internet, I was convinced that this mushroom was Suillus americanus, with common names of White Pine Bolete or Chicken-fat Suillus.  All sources mentioned that this species was, indeed, a good edible,  so I washed the pine needles off, dried them carefully, then sliced a few and fried them up in butter. 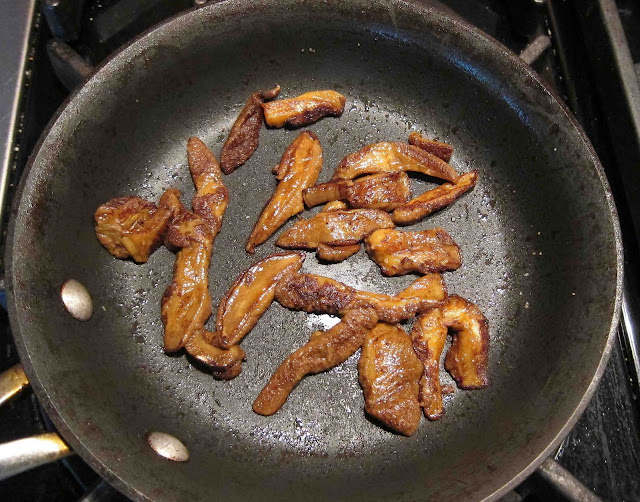 So how did they taste?  Meh.  To me, not so good.  They stayed kind of slimy and gelatinous, although I tried to fry them crisp.  They smelled delicious, but they had a kind of lemony acidity that I didn't much care for.  My husband, though, thought they tasted great, and he ate them all up.  As for me, I'll stick to morels when I crave wild mushrooms.
Posted by Jacqueline Donnelly at 11:15 PM

"So, you enjoyed the morel at the end of the story!"

They look yummy! Also very pretty 'in situ' - sorry your paddle did not turn out so well.

Ha ha! Thanks for the little chuckle, Raining Iguanas.

Hello, hikeagiant, thanks for your comment. I wish those mushrooms tasted as yummy as they looked.

Sad about the Milfoil. But great photo of the lily pads flipping up in the breeze!

You are a brave woman to eat the mushrooms. I never seem to have that courage, no matter how convinced I am of the identification.

You trusted your mushroom ID that much, eh? You're a braver man than I!

Hi Ellen and Woodswoman. You are smart to be very, very cautious about eating mushrooms. This Suillus was so very distinctive, though, I had no doubts, and I only tried a taste. It's wonderful, too, to have so many images and descriptions available on the web. Also, I have read there are no boletes that will kill you dead, although there sure are some that could make you wish you were, most of them with red or reddish pores.