Party Time at the Donnellys

HAPPY FOURTH OF JULY, a grand day for family and friends. 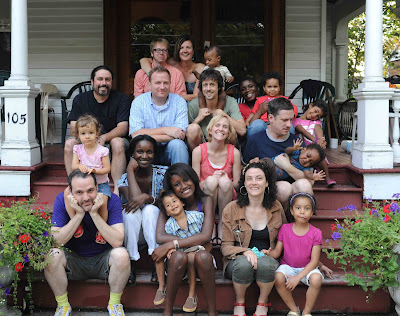 Photo by Denis Donnelly
Well, I did get out for a paddle to Pyramid Lake this weekend, but I haven't had time to post a blog about it yet. Coming soon. In the meantime, here's a photo of the happy crowd that filled our house for the holiday. The gathering was a reunion of sorts for my son's band, The Figgs, which started here in Saratoga Springs way back in 1987 and is still making records and performing around the country. (That's my son Peter on the top step in the green tee with his baby son Alex on his shoulders.) The band tours a little less than they used to, though, since all three members have families now. Just look at all the little ones! The photo also includes one former band member (and his family) and several friends from when they all lived here in Saratoga. This weekend they gathered from Boston and New York City and Philadelphia and other places to celebrate the holiday at our house, and a grand time was had by all. Including (or especially) Grandma Jackie.
The silence in my house tonight is deafening, despite the bams of fireworks a block away. As soon as I get all the laundry done, I'll be back in the woods or out on the river, and back to posting my nature blogs. What a great country we live in! Happy Birthday, America!
Posted by Jacqueline Donnelly at 10:01 PM

You were one busy lady! Isn't it amazing how silence can be loud ;-) Happy 4th to you as well!

The very best kind of 4th to have, one shared by family and good friends! I'm glad you had such a grand time.

Thank you, Louise and June and hikeagiant. I hope your holiday celebrations were as happy as mine.