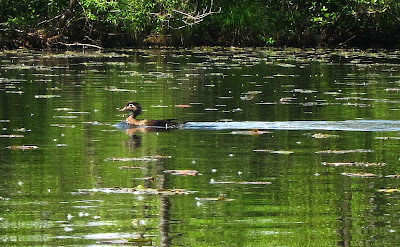 Mama Wood Duck tries to lure me away from her endangered duckling.
While paddling the Hudson at South Glens Falls today, I became aware of a commotion under the trees along the shore. A Wood Duck hen was thrashing back and forth, back and forth, beating her wings on the water and hooting as if she were trying to get me to follow her. Then I saw why: her duckling was snagged by its bill on a lure dangling down from fishing line that had caught in a tree. Oh, the poor little thing! It was jerking and thrashing and tugging, to no avail, for that hook was pushed all the way through its tender little blue bill. I hurried over to try to remedy the situation.
I grasped the duckling in one hand and managed to work that nasty hook out, with mama going berserk around me during the procedure. As soon as the hook was freed, I released the duckling, who tore off to shore and into the underbrush. At that point, mama directed her energies toward trying to lure me away from the site. I obliged her and paddled quickly away.
Gosh, but I hope that little guy will be okay. Please, fisherpeople, make sure you don't leave your lures unaccounted for. 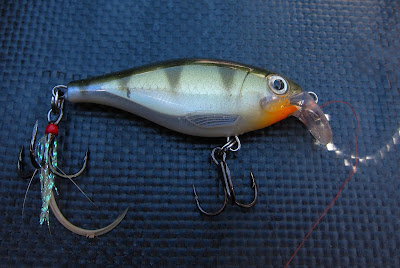 The instrument of torture for a baby duck
Posted by Jacqueline Donnelly at 10:16 PM

Email ThisBlogThis!Share to TwitterShare to FacebookShare to Pinterest
Labels: duckling

Lucky duckling that you happened to be there. Abandoned fishing lures are definitely a menace to wildlife. We once found an adult great blue heron caught up in a large rebel rapala - a minnow-mimic with three treble hooks. One of the hooks was in its beak, one in its wing, and one in its leg. Thankfully, we were able to free it.

Congrats on the rescue!
I always make every effort to retrieve lures, and not just because many or them cost about $5 each. You can almost alway reach them with a stick (sometimes it takes a bit of string or rope on the stick to snag the hook to get it back).

ANOTHER hazzard from lazy, sloppy anglers is lost fishing line. It just takes a little effort to bring it home to recycle.

That must have taken some courage on your behalf to dislodge that lure, well done you! made my knees quiver just thinking of it.

Hooray for you! Fisher people: don't leave snagged lures behind!

Imagine the story that duckling can now tell to its 'buddies'! :-) Sad that it happened at all. Glad you were there 'to the rescue'!

Thanks, dear readers, for all your comments. It broke my heart to see that helpless little duckling and its frantic mom. I think I will carry some tool in my boat bag to remove the barbs from hooks. It almost made me vomit to rip that hook out. But my only alternative was to kill the poor thing. Glad I didn't have to do that.