Snow in the Woods (And Other Stuff, Too)

What the heck?! It was 80 DEGREES today! Why was there still so much SNOW in the woods at Orra Phelps Nature Preserve in Wilton? I almost let the sight of it dissuade me from going in search of Snow Trillium here, but I did note that part of the woods was clear, including the ridge where this most unusual (for New York) trillium comes up every year -- often while snow still remains on the ground in the surrounding woods. 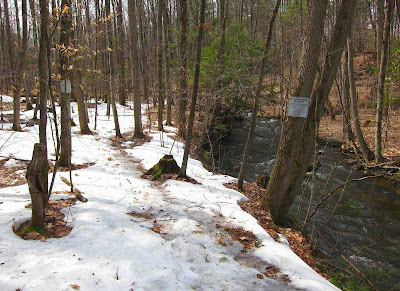 And sure enough, there it was! I almost stepped on it. As this photo shows, it's so small it would be easy to miss if it weren't such a brilliant white, and blooming when nothing else is even in bud. 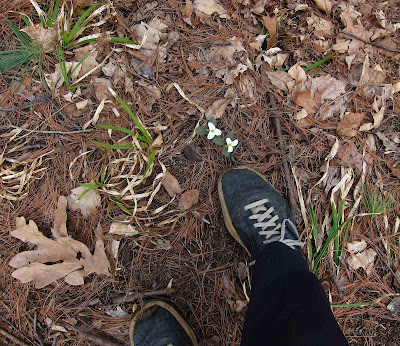 Saratoga County is way out of range for this dainty little trillium, which normally grows no further north or east than Pennsylvania. That's why I'm pretty sure that Orra Phelps, the previous owner of this property, must have planted it, as she was known to do with other rare species. But it seems to have found a happy home here, since last year I counted more than a dozen plants. Only four were blooming today, but I could see more coming on. How privileged we are, to have this lovely flower move to our neighborhood! 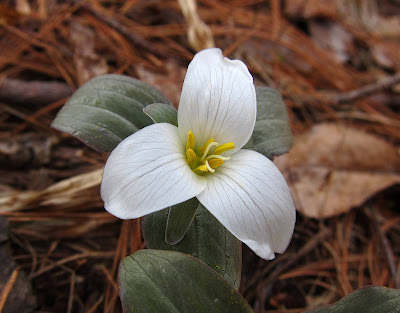 We expect to see Hepatica in our neighborhood, and there it was, opening its shimmering white blooms on this very warm and humid day. 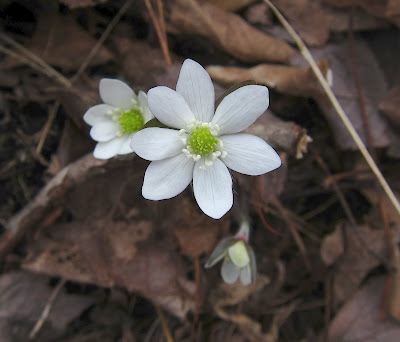 Does anybody know what causes these mysterious mud worms to form in low soggy spots? They remind me of worm castings, except that they are nearly three inches in diameter. 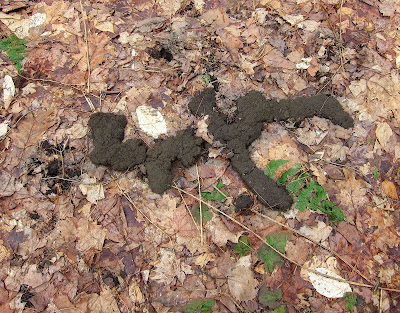 I also noted holes in the muddy ground of a similar size, but several inches away from the deposit. It's as if some critter ate its way out from under the muck and then vomited or pooped out the mud. The deposits are lying on top of the leaves. I sniffed them and they didn't have any particular odor, other than that of mud. Not like beaver mudpies, which the beavers cover with their scent. My husband suggested frost heave. I just don't know. Any ideas, anyone?
Posted by Jacqueline Donnelly at 8:35 PM

I sure wish I could tell you with certainty what those muddy piles are, but I don't know! I have seen them before, though. Did you pick 'em up to see if they were pushed up from the ground, like mole tunnels? Hm...I'll keep an eye on your comments to see if anyone else knows what they are.

Maybe some kind of a slime mold?

the trillium - beautiful! So far I've only seen Dutchman's Britches and one tiny hepatica - am so looking forward to having the weather this week make more blooms 'pop'!

I love that snow trillium -- would be a new one for me....but that will have to wait for another day.