Cold Day for a Warming Hike

Zero this morning. Brrrr! Too cold to go for a hike, I told myself. Besides, I just got back yesterday from a week away and I had lots to do at home. But that brilliant sun shining from a clear blue sky was pouring in my window, warming my face as I sat to read the morning paper. And then I saw the weather forecast for tomorrow: FREEZING RAIN! All our beautiful fluffy snow is about to be ruined. I just had to get out and enjoy that snow today, so up to Moreau Lake State Park I drove, to hike on snowshoes up the Red Oak Ridge Trail. 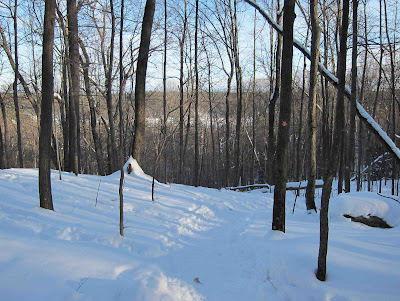 This trail runs along a high ridge through a lovely mixed hardwood forest, with occasional views of the lake down below and just enough steepish climbs to get your heart pumping and your temperature rising to a comfortable coat-shedding level, no matter how cold the day may be.
This trail eventually connects with a spur trail that leads even higher up the ridge, to a place of boulders and caves that my friend Sue calls the Valley of the Porcupines. Sure enough, I soon located the distinctive troughs made by these wide waddling critters as they make their way from den to feeding tree. (I think a fox may have shared that trough today, since I saw an occasional dainty five-toed canid print among the fat flat prints that Porky makes.) 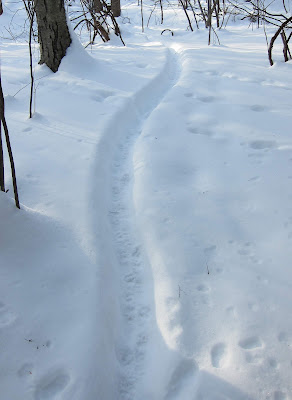 There were new porcupine trails today, leading to hemlock groves that had yet to be pruned to baldness by Porky's gnawing teeth. There was evidence, though, that that task had begun, to judge from the hemlock twigs littering the snow. I followed one of these new trails today to where it led into a cave. Porky must have been hiding out down there, because I did not see any bristly brown critters climbing among the treetops. 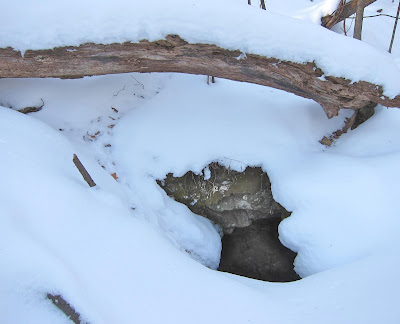 Close by the porcupine boulders runs a little stream that was decorated with pretty frost formations. Some were like feathery ferns, . . . 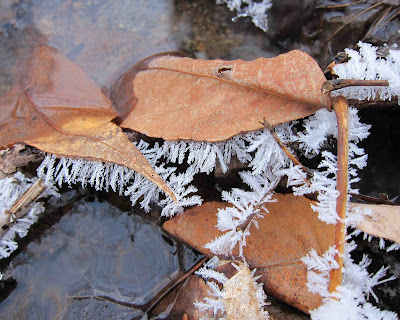 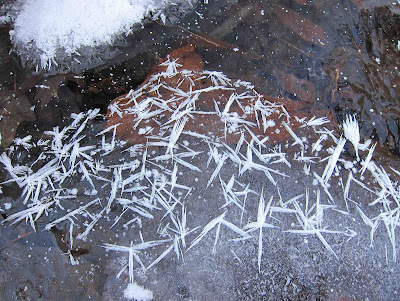 After descending the trail to the lake, I walked on the frozen surface, staying close to the shore where the dark convoluted limbs of High Bush Blueberry showed in stark contrast against the glittering snow. 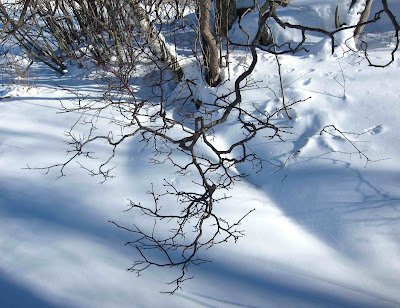 Posted by Jacqueline Donnelly at 8:28 PM

I love those frosty crystals.
I tried to take pictures of similar crystals once, but my camera isn't good enough.

Surely it could not be the operator...

I did not know that porcupines made troughs like that. I'm sure I haven't seen one but if I do, I'll know now.

Thank you for your lovely posts. I admire your ability to notice in such detail, AND to know what your'e viewing. Beautiful!

I was struck by the parallel of our hikes yesterday. Although it was not zero here in southern CT, it was cold. I, too, could not bear the thought of having all this lovely snow 'destroyed' by ice/rain. Gratefully, I accepted a friend's offer of his snowshoes, my first trek using them. I'm hooked! It was just such a treat - although this new kind of walking was a bit of a challenge, and I did see snow up close and personal a couple of times - getting back up is sure tricky - it was quite an experience.

Thanks for your blog. I've shared it with others and they agree. Pure delight!

I love those photos.

Ice crystals like falling stars. I like that comparison. I wussed out and stayed in yesterday. And then, I was sorry I did.

Hi June, I do have to give lots of credit to my camera. I got a new one for Christmas, a Canon S95, which has a bigger sensor than my G7, although my G7 takes closer macros, so I'll continue to use it for close ups. I am impressed by the sharpness and clarity of the images I'm getting with the new camera. Regarding those porcupines, yeah, they're very low-slung so they kind of plow through the snow instead of leaping. Also, they travel the same route each day from den to feeding tree, so their trails get really packed down.

hikeagiant, thank YOU for your very kind comment. I'm glad you tried out the snowshoes. They let you go anywhere in the woods, not just on groomed trails. And you're not going very fast if you fall, so you don't get hurt. Just very, very snowy!

Thank you, squirrel. And I love to hear from you!

Louise, there are days when it just seems right to stay indoors. I did the same today.