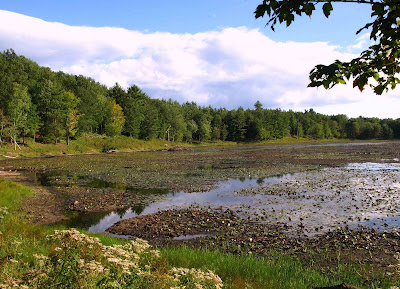 Hey! Who pulled the plug? When the sun came out this afternoon after a dreary damp morning, I headed to Mud Pond in Moreau Lake State Park, hoping to see lots of dragonflies flitting about the open water. But there's not much open water left. I know our summer was kind of dry, but I've never seen Mud Pond so low. A few groups of geese were waddling about on Water Lily mats, probably wondering What the heck? Where'd our swimming hole go?
And surprise! Somebody else was out there, too. A pretty rare visitor to these parts, this long-billed, stilt-legged, snow-white bird. I would have called it an egret, but my friend Sue told me it's a white heron. 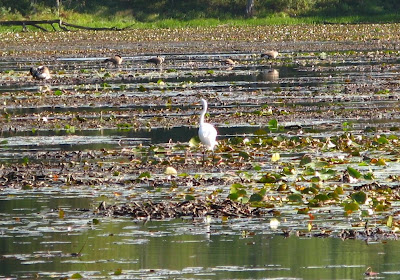 After searching several internet sites, I learned that Great White Herons are strictly southern birds, and they have yellow legs. My photo's not very clear, but I seem to detect black legs. So which is it: heron or egret? Or is an egret just a white heron? Maybe somebody out there knows and will enlighten me.
I'm off tomorrow for a two-night vacation up north at Elk Lake Lodge. If there's one single most beautiful spot in the Adirondacks, Elk Lake is it, with its numerous islands and spectacular views of the high peaks rising just to the north. No computer access, though, so I won't be posting any blogs until I get back. For sure, though, I'm taking my camera. So stay tuned.
Posted by Jacqueline Donnelly at 10:08 PM

It looks like a Great Egret to me. We get them in the sloughs in middle and eastern SD in the summer. I know they really wander during the post breeding season.

The Wurdemann's variety of a Great Blue Heron has a whitish cast, but is not all white, it was once known as a Great White Heron, but that name is no longer in use, and you are right about it being a southern bird.

Ditto whatever everyone else is saying. Looks like a great egret to me!!

Yeh, it's a Great Egret, but as others have eluded to, what we're talking about are common names; so they're just that -- common names. Therefore you can find several names for the same species in different locations; sort of like you find with plants and wildflowers. Different folks have different names for the same thing. That said, you'd find in a field guide, that "Great Egret" would be regarded as the most accepted common name. Also, egrets and herons are obviously closely related, and I don't know to what extent the common names fall in line with evolutionary divergence of the various species. I'd have no reason to expect them to at all. So all this long-winded comment comes down to, is that while there are generally accepted common names, there's not much to quibble over, as say in the case of a scientific name. Make sense?

Heck, I don't know. I just know it's beautiful. So, because everyone thinks it is a Great Egret, that's what I'll call it too.

Thanks, everybody, for weighing in on the egret issue withe such good information. Your interaction is what makes keeping a blog so educational, as well as fun.