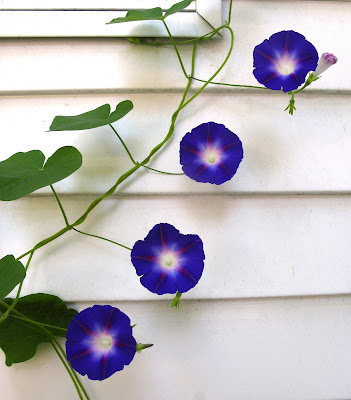 Cloudy and kind of chilly today, with a little rain now and then. I'm surprised these Morning Glories actually opened. As it is, they bloom so late in the season that by the time they open each day they should be named Afternoon Glories. But I can't complain, since I didn't plant them; they just come up by themselves year after year. I did plant some blue ones 20 years ago, and one of these purple ones must have made it into the packet of seeds. Ever since, they seed themselves each year and grow like crazy, while the blue ones never re-bloomed. Because of this, can I call these purple ones wildflowers?
Since I'm staying in today to do some housecleaning, I'm also cleaning up recent photo files, where I found some stuff that didn't make it into past posts. I was about to toss them when I decided, oh what the heck, I'll just put them up on the blog for whatever they're worth.
When I first took this shot of orange-polka-dotted Mountain Ash, I never noticed the orange-headed ant, let alone the tiny bumps in the orange spots that the ant seems to be attending. Is this some kind of fungus the ant is harvesting? Any ideas? 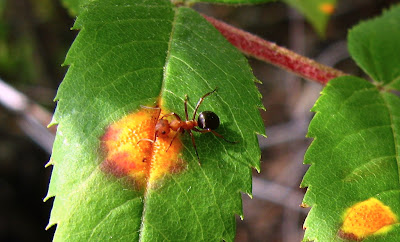 At first glance I thought this zebra-striped bug was a wasp or a bee, but turns out it's a fly: Pilomyia fusca, a hoverfly that mimics the Bald-faced Hornet, according to the helpful folks at BugGuide.net. As adults, hoverflies eat mostly pollen, but their larvae are important predators of many agricultural pests. I thought its black-and-white coloration was striking and unusual. 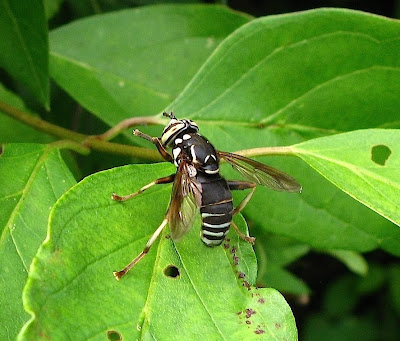 Thanks again to the folks at Bug Guide, I learned that this leathery-winged beetle is a Goldenrod Soldier Beetle. I learned lots of other things about it from Jennifer Schlick's blog, "A Passion for Nature." Rather than repeat all the fascinating details she dug up, just click here to go read what she had to say. But if you're squeamish, better not.

I sure wish there were a FungusGuide.net to identify all the fungi I find that never show up in any of my mushroom books. I don't know the name of this tiny white mushroom, I just thought it was dainty and pretty. 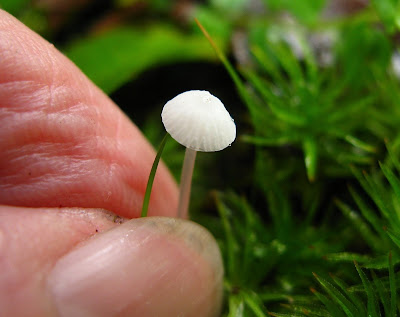 Posted by Jacqueline Donnelly at 1:31 PM

I enjoy your various excursions. Thanks for sharing.

I've never seen an ant like that. Must look at ants more closely. I like the little ones, that, once a year, swarm out of the nest in huge numbers, to see their new queens off into the world. I didn't see any this year. Maybe it was too wet?

Oh, I love that Morning Glories shot! And I too wish there were a fungusguide.net... I am so often stumped by fungi.

Another appreciation of the Morning Glories photo!

Thanks for the tip about the mushroom group, Steve. I applied to join but I've yet to hear back from the group. I hope they're still active.

Louise, I am very happy to learn that somebody else has a liking for ants.

Jens and WoodswomanX: thanks for your kind comments. I too thought those Morning Glories looked pretty striking.