Well, I guess I could have been disappointed that no one showed up for my nature walk at Ballston Creek on Saturday. No one, that is, but my loyal friend Sue, plus Scott Miller, who was there representing Saratoga P.L.A.N., the land conservation group that scheduled the event. But in some ways, this was a lucky break. If we'd had a big group, we probably wouldn't have been able to spend over an hour observing the most remarkable Osprey behavior I've ever seen. 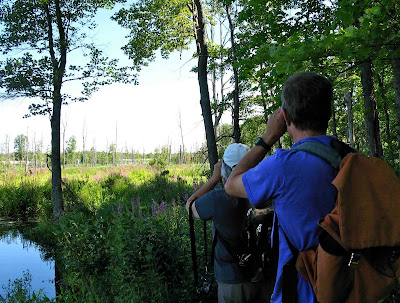 The trail at the Ballston Creek Preserve leads to an open marsh with an active heronry, and one of those heron nests has been appropriated by a pair of Ospreys, who reared a pair of young there this summer. A week before, I had seen two young ones perched on the edge of the nest, but on Saturday it appeared to be completely empty. My dismay at finding the nest abandoned was short-lived, however, as the loud cries of an adult Osprey drew our attention to where it was circling, fish clutched in its talons, apparently trying to coax a second Osprey -- we guessed it was one of the fledglings -- off its perch in a distant tree.
Now, I'm no Osprey behavior expert, so I can't be sure that that's what the parent bird was doing, but that's sure what it looked like. Round and round that parent bird flew, dangling that tantalizing fish before the perching bird's eyes, as if to say, "Hey, come on! Spread those wings! You gotta go get your own dinner now, 'cause Mom and I are done doing the fishing for you."
The fledgling continued to cling to its perch, quite a distance from its nest. Perhaps the flight from nest to perch was the first time the young bird had spread its wings, and it sure seemed reluctant to take to the terrifying air again. 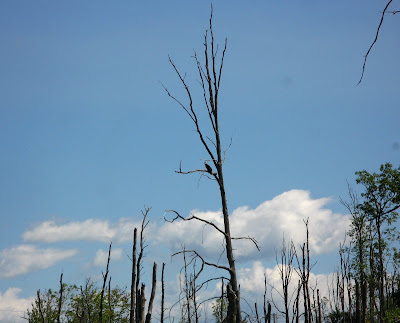 Observing all these goings-on was a trio of juvenile Great Blue Herons, who kept shifting restlessly in their nearby nest, occasionally standing to stretch their impossibly long stilt-like legs. 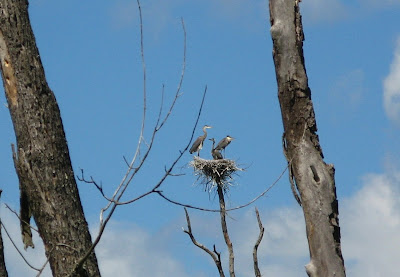 I imagine that nest is getting pretty crowded by now, as the juvenile herons achieve adult size but not yet adult skills. They won't be there long, I'm guessing, since all the other nests we could see were now empty of young, where a week ago each nest had been occupied.
I've read that Ospreys will use the same nest year after year, expanding it with each new brood. So now that we know where the nest is, we can plan to come back next year to watch the drama unfold anew. Ten years ago, sighting any Osprey was quite a rare event. What a privilege, then, to not only have Osprey populations expanding, but also to have such a wonderful vantage point from which to watch them rear their young.
Posted by Jacqueline Donnelly at 11:08 PM

Oooo - how exciting. I actually thought of you and your ospreys this AM as I drove past The osprey nest along Route 22 en route to Crown Point. This nest has been here for a few years, and I've gotten pics of young osprey in it in the past. Sure enough, I saw one standing in the nest as I drove by.

How wonderful that you were there to see that behavior. And, that, now that you know where the nest is, next year you can observe it all year long.

Thanks, Ellen and Louise. We are so incredibly privileged to have this magnificent bird make its home so accessibly among us.

What you are describing is exactly what I watched my Eastern bluebirds and my violet-green swallows doing to light a fire under their fledglings to leave the nestbox. It worked with nice juicy bugs for them.

greentangle and Caroline, thanks for your comments. I'm happy to have my suspicions confirmed. What a thrill it was to watch this parental display!