New Finds in the Bog 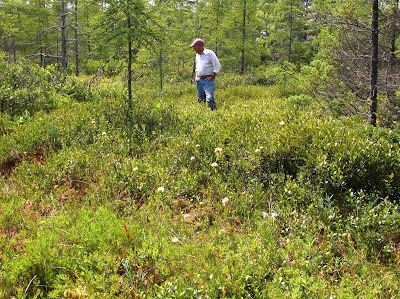 Ed Miller searches the bog for rare plants, surrounded by heath shrubs and cottongrass.
Every month brings something new to find in the wild, and that's especially true of such fabulous places as bogs. Unfortunately, most bogs can be pretty difficult to get to and even harder to get around in. But there's one bog not too far from Saratoga that one can just mosey into, without having to haul a boat through brambles or push through impenetrable undergrowth. I asked my friend Ed to come there with me today, because he'd told me he'd seen a rare plant called Podgrass growing in another bog, and I hoped he could find some in mine. I'd heard reports that it used to grow there.
Well, we didn't find Podgrass today, but we did find some other interesting plants, two of which were new to me. The first was this beautiful Swamp Loosestrife (Decodon verticillatus), also called Water Willow. 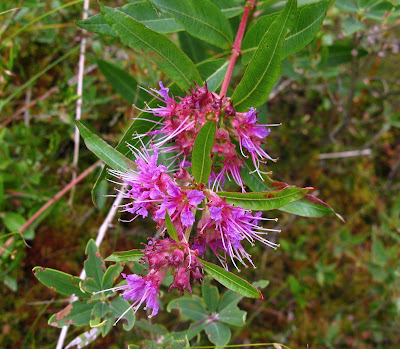 Its purple flowers growing in spikes resemble those of the dreaded alien aggressor, Purple Loosestrife (and the two are indeed related), but this one is a native plant that minds its manners and lets other wetland species survive around it. Ed was a little surprised to see it growing out in the bog, since it usually grows in less acidic wetlands.
Here's another new plant for me, called Yellow Bartonia (Bartonia virginica), and believe me, it was some kind of miracle that I ever saw it. The bog we were tromping was at least the size of two football fields, and coming across this wee little sprig of a thing in all that sphagnum and blueberry and knee-high sedge was like finding a needle in a haystack. And we never found another. 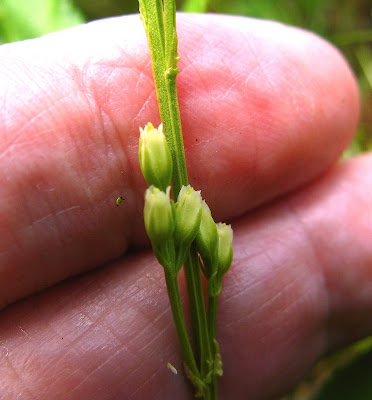 Ed would not concede that this was indeed Bartonia until he had consulted his many manuals at home, but I'm sticking my neck out here and asserting that it is. After looking at many images on the web, I have isolated five features that distinguish this tiny plant and match the one we found: Clusters of small yellow-green flowers, a five-angled stem, four minute petal lobes protruding beyond the sepals, the small opposite scales on the stem instead of leaves, and the bog habitat. What else could it be?
Some old friends were still hanging on in the bog, including just a few White Fringed Orchids. Although many of the blooms on this flower stalk have withered and turned brown, one or two were as stunning as ever. 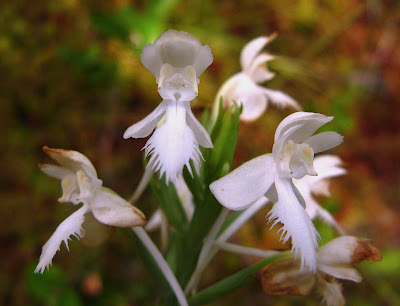 Much of the sphagnum growing here was a rich burgundy red and quite beautiful to behold. This baby Black Spruce was growing happily here, and Ed was happy to find it. 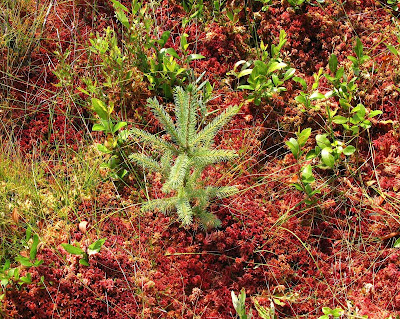 Most of the small Black Spruce growing out here are clones sprung up from the buried branches of old trees sinking ever deeper beneath the sphagnum mat, but Ed found a few tiny ones that appeared to have sprouted from seed and thus had their own root systems. Ed has established and maintains a miniature bog exhibit at the Landis Arboretum west of Albany, and miniature trees like this are exactly what he needs to complete the habitat. Luckily, I had the right-size plastic bag so that he could take one home.
Posted by Jacqueline Donnelly at 9:01 PM

What a great way to appreciate life. Thanks for the pictures and nature information.

I think Thoreau said his favorite place to hang out is in a bog...

Another great blog post! You do find the most interesting plants to write about.

John Persico, thanks for stopping by with your kind comment. Your visit also gives us the chance to visit your own thought-provoking blog about Time. Click on John's name to take you right there.

Hi Allan, always good to hear from you. I'm not surprised that HDT's favorite place was a bog. There's always something amazing to discover there.

Thanks, Anonymous, for your kind comment. I am so grateful to all the new friends I've made through my blog, who show me their secret places where rare and fascinating species grow.