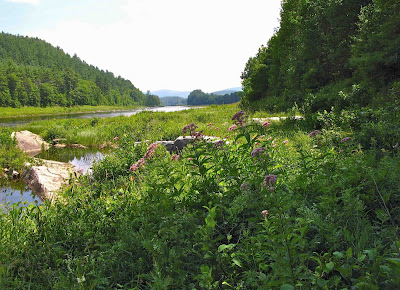 High summer on the Ice Meadows
Another perfect summer day, bright and breezy, not too hot. So no more excuses, Jackie, get out there and do what you said you would do. I had promised a University of Rochester professor that I would procure for him some specimens of Yarrow from the Hudson Ice Meadows north of Warrensburg, and I'd been putting it off because of the daunting heat these last few weeks. But today was a good day to do it, so off to that stretch of the river I went, zip-lock baggies in hand.
Now, why would a botanist have any interest in Yarrow, that homely old thing that grows along dusty roads and railroad tracks and other "waste places"? Everyone knows it's just a weedy alien, right? Well, Justin Ramsey, Assistant Professor of Biology at Rochester, disagrees. He believes that our eastern North American Yarrows are, for the most part, native to our continent. His argument rests on comparing chromosome counts between our native plants and those that are imports from Europe. The Ice Meadows, a stretch of river banks heaped with masses of ice each winter, is known to be an area rich in native plants, so specimens gathered here have a good chance of being the native species. Well, we shall see. I'll send off my baggies tomorrow, then wait to hear the answer. 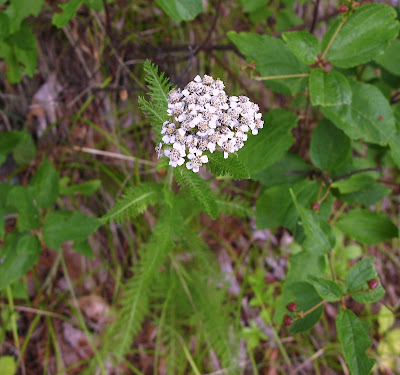 Actually, it wasn't easy to find those Yarrows, despite the open, rocky, and sandy habitat being just their cup of tea. There were only a few, high on the banks near the woods. What I did find lots of, however, were these itty-bitty Buttercup Family plants called Creeping Spearwort. I usually have to search and search and be happy if I find one or two, but today these tiny yellow flowers were spangling the shore like stars in the sky. 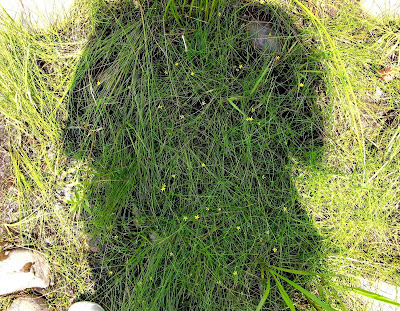 Woodland Sunflower was also blooming abundantly, but with flowers about half the size I usually find them. Most of the plants that grow near the water here on the Ice Meadows are dwarfed to some extent, probably because of several factors, including frequent flooding that washes nutrients out of the soil. 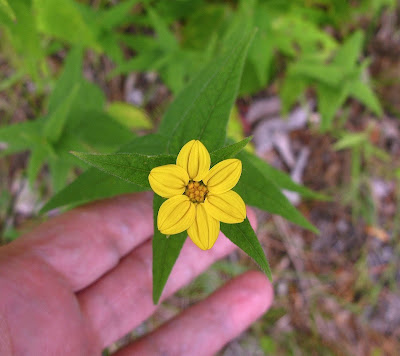 This beautiful Fireweed wasn't dwarfed in any way, probably because it was growing high up on the bank well away from the flood zone, an area of frequent disturbance. This plant is known to thrive on disturbances like fire, however, which is how it got its name. It will be among the first plants to repopulate a burned-over woods. 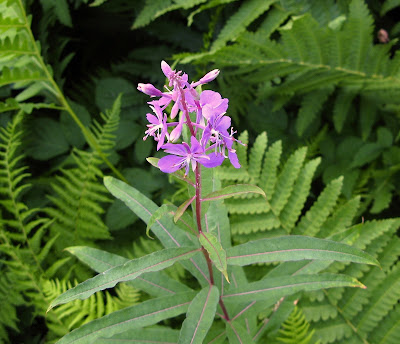 While hopping around the rocks near some spring-fed pools, I spied these bright-yellow chubby little flowers growing out of the shallow water. 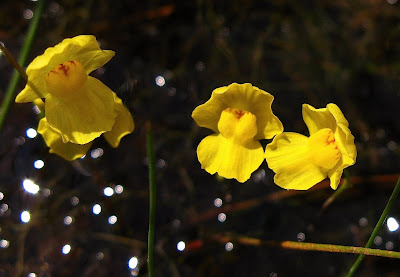 They were poking up from amidst the water-logged leaves of Flat-leaved Bladderwort, but they didn't look like that species of bladderwort at all. Plus, the flat-leaved kind bloomed way back in early June. A quick flip to the very first illustrated page of Newcomb's brought me right to their picture. These are Humped Bladderwort, a name that suits them well.
Posted by Jacqueline Donnelly at 8:17 PM

Interesting about the yarrow. I know that I'll be interested to know what the result is.

If I can get moving (made a new garden yesterday and the back is killing me, in spite of the fact that the neighbor boy did most of the heavy work), I'm meadow walking today, near the Gosnell Big Woods. I'll be looking for those Woodland Sunflowers.

Ooo - I like those bladderworts! And who knew about the yarrow! You had a great day to hit the river - I'm glad you had some many terrific finds.

Hi Louise and Ellen. Thanks for your comments. I spoke to the professor at Rochester, and he said he will continue his study of Yarrow in the fall, so I guess we'll have to wait until at least the fall to learn if our Yarrows are chromosomically correct.