Remember that recent excursion my friend Evelyn and I took to a cedar swamp on Pyramid Lake? (See my blog post for June 23.) I got a note today from Steve Young, Chief Botanist for the New York Natural Heritage Program, telling us that two of the plants we found that day were rare finds, indeed! The Pink Pyrola (Pyrola asarifolia) he told us hadn't been found in Essex County since 1941, when a man named Homer House found it growing in nearby Paradox Lake. Here's a close-up shot of one of dozens we found at Pyramid Lake a couple of weeks ago. (To see a full-plant photo of one we found in another county, see my blog post for June 18.) 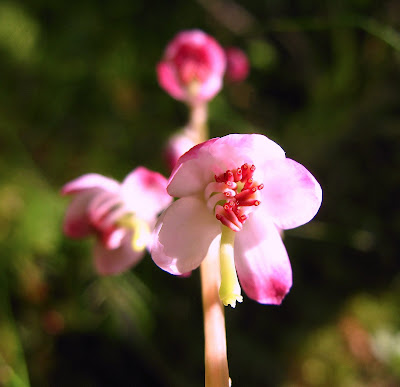 And the Small Bur-reed (Sparganium natans) we found was last reported in Essex County in 1931, when it was found in Upper Ausable Lake in the high peaks area of the Adirondacks, quite a few miles away from Pyramid Lake. As this photo shows, it seems to have found a happy home in Pyramid Lake. 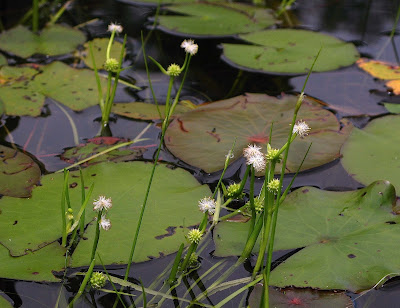 Posted by Jacqueline Donnelly at 9:34 PM

Wonderfully exciting! Thanks for sharing!

Y'know, it's been pestering me in the back of my mind since we visited the showy ladies slippers and saw all the pink pyrola there that I have seen this plant before...and I'd swear it was on the VIC property (which is in Essex County), but darned if I have it recorded anywhere. I will have to go through my various notes and files (if I can find them, that is - so much stuff is now packed in boxes) and see if I can find a reference.

I forgot to mention that Homer House was the NY State Botanist in the early 1900s.

Hi catharus and Ellen and Steve. Thanks for your comments. I wish you all could have been with me when we found those flowers. Ellen, if you can document when and where you found Pink Pyrola in Essex County, I'll bet Steve Young would like to know.