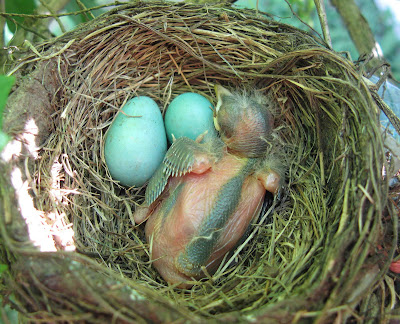 Hey, where'd the new baby go? I peeked into the robin's nest today, hoping to find the remaining eggs hatched, but not only were the remaining two eggs still intact, but the baby hatched on Monday was nowhere to be found. I searched the ground under the nest, thinking maybe the smaller one had died and its corpse been chucked from the nest. If so, it was now long gone. Perhaps a stray cat or a bluejay or squirrel has carried it off. Or robbed the nest in the first place. Ah well, I guess these things happen.
At least the remaining baby seems to be growing, as a glance at this photo taken on Monday reveals. As the above photo shows, the skin is now darkening too, and tiny pinfeathers are poking out now from the wings. 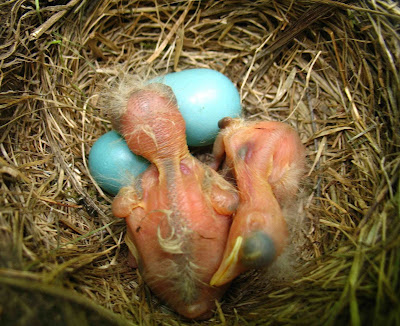 It's now been three days since the second egg hatched. I wonder if the remaining two never will. I'll keep checking. I'm assuming, since it's already July, that this batch is the second clutch of the year, the first babies having long since fledged. Does anyone know if second clutches have a lower success rate? Let's all hope that this one baby makes it.
Posted by Jacqueline Donnelly at 9:17 PM

I'm pulling for them!

I'll have to read back a way to find out more about your nest! Seeing it and the eggs and chick reminds me how closely related your American robin is to Europe's blackbirds and song thrushes. The nest and eggs are very similar. I hope the nest hasn't been found by predators, they almost certainly will come back so I'll cross my fingers and hope for this sturdy looking chick.

A blackbird once nested in the window box on our kitchen window ledge, and as I work at the kitchen table, that meant that I could watch the goings on on an hourly basis. They fledged one brood of three successfully, but magpies noticed the nest after the second lot of eggs were laid and the poor birds never had a moment of peace afterward. I like magpies actually, so I should be glad they got a good meal... but when you get all invested in a nest, it is awful when it gets raided.

Sorry for rambling on, have missed reading your blog terribly.

Hi Jackie, this is the wonderful show of nature.
Have a good day

Hi Allan and Bird and Sciarada. Sorry to take so long to respond to your comments. A houseful of guests has kept me away from my blog for days, but I want to tell you how glad I am to find your comments. I have missed you, too, Bird, and I'm so glad you've come back. And what a surprise to have Sciarada visit all the way from Italy. Thanks for stopping by.