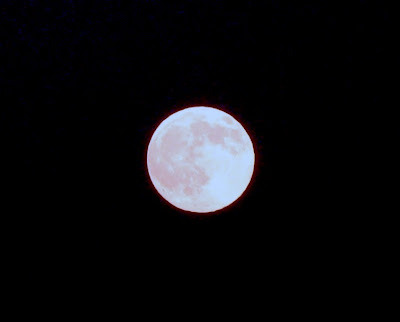 O blessed relief! After a cloudy morning and a brief sprinkle midday, the sky cleared and a fresh breeze brought cooler and dryer air. We may even need to sleep under a blanket tonight, for the first time since late May. And what a glorious moon is up there in the sky tonight!
I went back to the Hudson this morning, even though it was then threatening rain. While paddling here with a friend just a year ago, my friend had reached into the water and drawn out a thready tangle studded with tiny bladders and declared that it looked like a rare kind of bladderwort, Utricularia minor. But she wasn't sure. So that's what I set out to find today. And yes, I did indeed find it. Quite a few plants, in fact. I have sent this photo, as well as a couple more, to our state's chief botanist, so maybe he will be able to identify it. Stay tuned.
Update: State botanists have suggested that this is Utricularia gibba (Humped Bladderwort), not the U. minor we thought it might be. Since I found some Humped Bladderwort flowers in bloom up north just a few days ago, I will reinvestigate where I found these, to see if I can find some flowers to confirm the identification.
At any rate, the river was lovely today, both sprinkled with raindrops (just a few!) and sparkling under the sun. After finding that bladderwort, I had no particular destination and inched along close to shore, following the contours of the banks into every little cove. 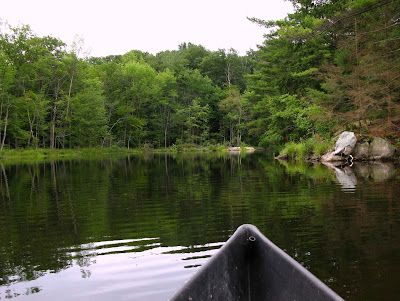 I moved so slowly and quietly, this family of Common Mergansers never heard me coming. Startled, the mama dashed rapidly away, followed by her half-grown brood. (My camera tried to follow but couldn't quite keep up.) 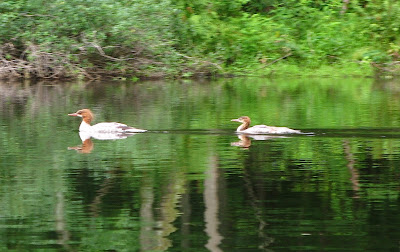 The banks were ablaze with Cardinal Flowers and rosy with handsome Joe-Pye Weed. New this week were the Tall Coneflowers, holding their bright yellow blooms above all the rest. 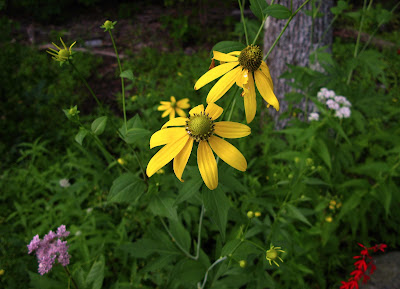 Also newly in bloom today was this solitary specimen of Turtlehead, its creamy flowers pale against the shadowed bank. 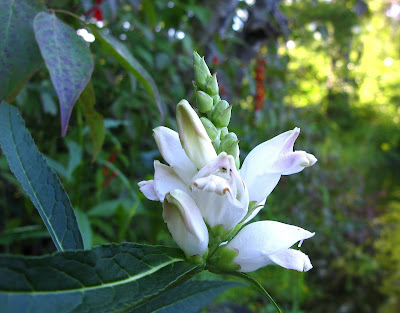 Marsh St. Johnswort has been blooming for a couple of weeks, but it's rare to find its pretty pink flowers fully open. I love how this little plant has nestled in among the blades of this clump of sedge. 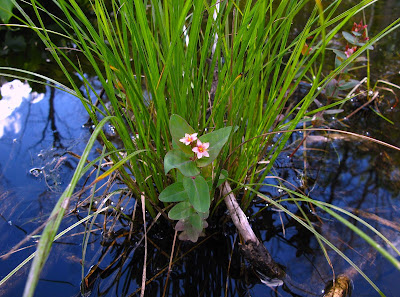 The reflected blue of that radiant sky added the perfect touch to the composition.
Posted by Jacqueline Donnelly at 9:56 PM