Today was the kind of day that summer dreams are made of: temperature no higher than 80, bright sun, cool breeze, a sky so blue you could see all the way to heaven. And lucky me, I had a date to go paddling on the Hudson with Ed. 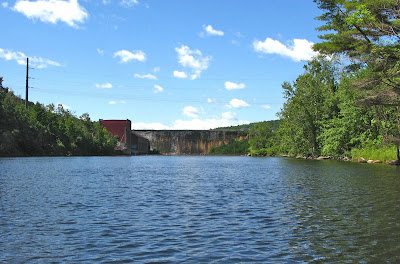 Ed Miller's a really remarkable guy. Well into his 80s, he's still game to go adventuring, especially if it involves hunting plants, which, of course, is what we were up to today. We set off together in Ed's tandem canoe, a lightweight fiberglass boat of Ed's own design, and headed upstream toward the Spier Falls Dam. I rarely go this direction, since the shoreline that holds the most interest for me is downstream, but Ed recalled that Wild Senna grew upstream, and that's what we meant to find. And find it we did, after a bit of puzzlement. The leaves of Wild Senna look very much like those of Black Locust, and many baby locust trees were populating the bank where the senna grew. But a quick comparison of the stems was all it took to distinguish the two. The locust stems were reddish and sticky and prickly, while the senna stems were smooth and green. And then we found some with fat yellow flower buds. ID confirmed! 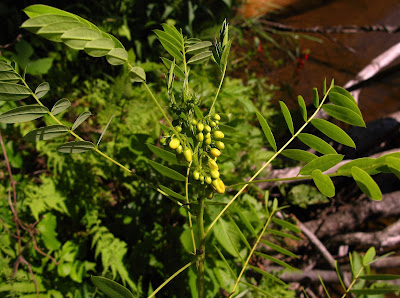 I'll have to get back here next week to get a photo of those flowers in bloom. Wild Senna is a new flower for me, and although it's not listed as a rare plant in New York, it's considered a threatened species in almost every state that surrounds us.
We were able to paddle all the way to the foot of the dam, a feat I have never accomplished before because of the usual strength of the current there, but today we were able to sail right up to it, no effort at all. The only water we could see coming through was over a small chute the dam constructors made to allow fish to pass without being ground to bits in the turbines. 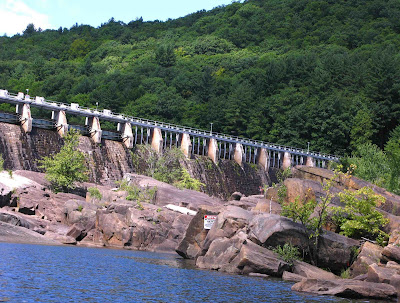 On our way back to the boat launch, we stopped for a swim on "my" pretty little island, where we could jump right off the banks into deep cool water, then haul out and bake in the sun on clean bare rocks. While there, we noticed the current increase and the water level rise, a sign that the dam was letting more water through. I'm glad we were well downstream by then. We explored the flora of that little island, and I'm happy to say I was able to show Ed some flowers he hadn't seen before -- Clammy Hedge Hyssop was one, and Marsh Speedwell was another. Let me tell you, there aren't many plants that Ed hasn't seen, so I felt a little prickle of pride that I was able to introduce these flowers to him. We also found Canada St. Johnswort, with flowers almost as small as those of Dwarf St. Johnswort but with the red buds and distinctively narrow leaves that set this species apart. 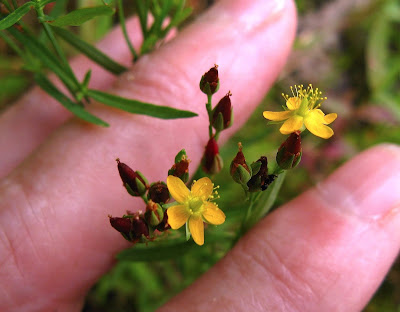 As I said before, Ed's quite a remarkable guy. Not only does he have stamina that would put younger guys to shame and an encyclopedic knowledge of plants that professional botanists could envy, he also can see stuff that most other folks would miss. For example, he spied a floating clump of that very bladderwort I was puzzling over yesterday. 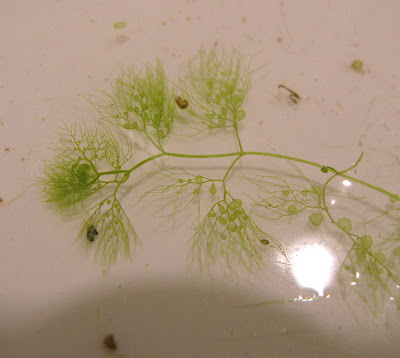 Luckily, I carry little zip-lock bags, so we plopped the specimen in there and studied it carefully with magnifiers after we reached Ed's car and the manual of water plants he had stashed in there. So! Is the mystery solved? Uh . . . sorry, we just couldn't parse it out. But at least today's specimen seems to have leaves, so maybe that will help some water-plant expert put a name to it. The jury is still out. (Or maybe this is an entirely different species!)
Update: Yes, it is an entirely different species -- it's Common Bladderwort. And the one I found a few days ago was probably Humped Bladderwort. Thanks to our state's chief botanist Steve Young and his colleagues with help on these IDs.
Posted by Jacqueline Donnelly at 8:23 PM

A lovely, and fruitful day!

What a special 80 something, young man...

What grand day to make up for the wet disappointment of not being able to paddle together last week !
Hey if you two had timed things correctly, you might have been able to just SURF back to the boat launch !
Senna, that would have been a new one for me.
Hmm did you check the tall skinny mystery plant - (or at least show it to Ed?)

Hi Louise and Allan and Sue. Thanks for the comments. As for those mystery plants, Sue, I tried to show them to Ed, but couldn't find them. I must really be growing blind!