Two Loosestrifes and One Invader

Two native loosestrifes were blooming today in the Skidmore woods, of such differing appearance and occupying such different habitats it's hard to believe they're related. The Whorled Loosestrife (Lysimachia quadrifolia), with long-stalked five-petaled yellow flowers growing singly in the axils of the whorled leaves, was blooming in a sunny dry area.
On the other hand, the Tufted Loosestrife (L. thrysiflora), with fluffy balls of yellow blooms growing from the axils of the middle leaves, was thriving in the deep shady woods with its feet in standing water. 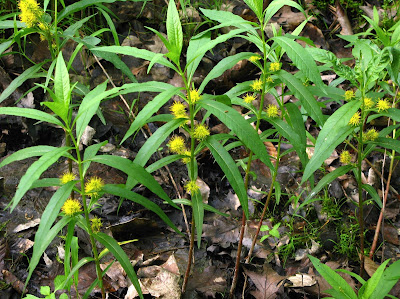 My Newcomb's Wildflower Guide describes the Tufted Loosestrife's flowers as having five or six petals growing "in short spikelike racemes." Hmmm. I think I would have had a hard time keying this plant using that description. Next time I see it I shall have to pull one of these tufts apart to find a single five- or six-petaled flower. 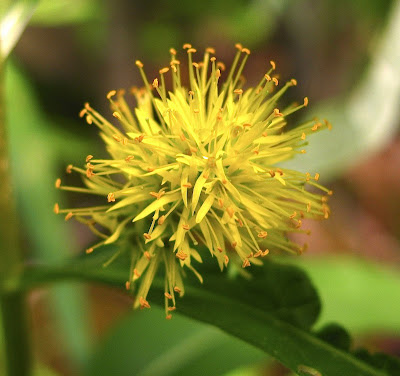 Neither one of these native loosestrifes is related to the alien Purple Loosestrife (Lythrum salicaria), the beautiful but aggressively invasive species that has driven many of our native plants from their original wetland habitats. 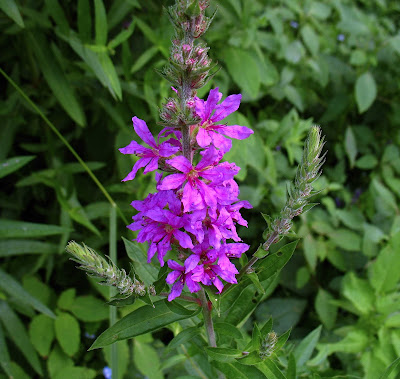 Happily, some wetlands up here in northern New York remain uninvaded by Purple Loosestife and continue to support healthy populations of beautiful natives. I'm joining my friend Evelyn Greene tomorrow to search for the rare and exquisite orchid called Dragon's Mouth (Arethusa bulbosa), which is on the state's endangered species list. So if I find some, I will show you a photo, but I promised not to reveal where they grow.
Posted by Jacqueline Donnelly at 11:45 PM

Oh, thank you for this post ! I saw Tufted Loosestrife on Sunday, and spent some frustrating time trying to find it in my Newcomb's ... glad I wasn't the only one