One Flower Gone, Another Discovered 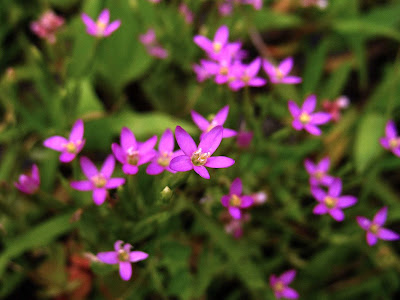 I'm posting this photo of pretty pink Centaury because I don't know if I'll ever see it again. It's a wee little alien weed that grew in the hard-packed dirt right next to the road at Ballston Lake, and it's a wonder I ever saw it in the first place, because it's so tiny. Each bloom is maybe a quarter inch across. But they do grow in masses, which makes them easier to see. Or I should say, they used to grow in masses. I went to visit them today (my wildflower journal informing me that their blooming time was near) and discovered the road had been resurfaced, with asphalt now covering the dirt where I'd found them year after year until now. Ah well. Sic transit gloria florae! That's why I take these photos.
As they say, though, you lose some, you win some. While moping about mourning the loss of my dear little Centaury, I looked up to see right before my eyes a big patch of Narrow-leaved Cattails. Not only are the leaves much narrower than those of the Common Cattail, but their flower stalks are, too, with the pollen-laden male part separated from the brown fuzzy female part by a length of green stalk. 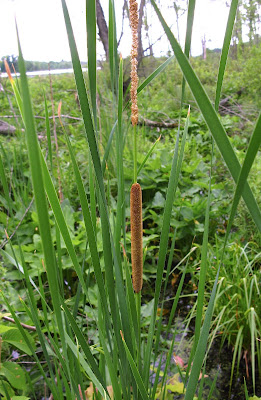 What's so great about cattails, you ask? I agree that they're not conventionally pretty, and the Common Cattail grows everywhere, so that would be no great find. But this narrow-leaved variety is quite uncommon this far from the seacoast. This swampy roadside near Ballston Lake is the first place I've found it in Saratoga County.
Growing along that same stretch of road were lots of Chicory plants, just this week starting to bloom. The generally weedy look of this long-ago introduced species is redeemed, I believe, by its gorgeous light blue flower with the curlicue pollen-dusted pistils. And look who's visiting those pollen-dusted pistils: A little syrphid hoverfly called Toxomerus geminatus (Thanks, BugGuide.net!) with iridescent wings and an abdomen made lovely by its black and yellow designs that look as if they had been applied by some master Toledo goldsmith. 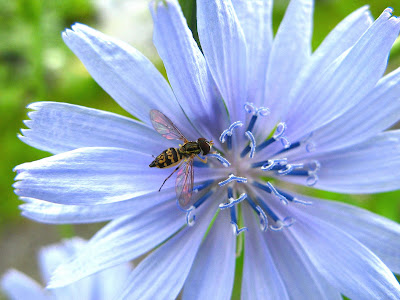 More loveliness awaited when I walked out on the fishing pier. Masses of Tuberous Waterlilies clog the shoreline here, much to the annoyance of boaters, I'm sure, but a real bonanza for waterlily lovers. The tuberous variety is about twice the size of the Fragrant Waterlily, and its leaves are green both top and bottom, not red underneath like those of the other species. 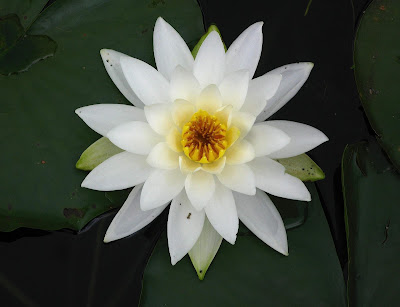 The flowers are so brilliantly white I had to shut the exposure way down to capture any detail in the petals, which makes the leaves look much darker than they really are.
Dalibarda's another flower that's hard to photograph because of the contrast between its bright white flower and its deep green foliage. So I doctored this shot a little to balance that contrast. 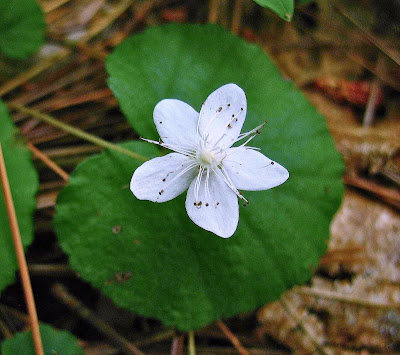 I love how the flower nestles there in the curve of its heart-shaped leaf. This woodland species was just starting to bloom at Woods Hollow Nature Preserve in Ballston Spa. I stopped there on my way home.
That's also where I found these Black Raspberries starting to ripen. They almost look too pretty to eat, don't you think? Almost. Yum! 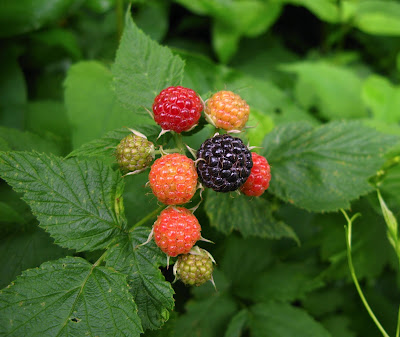 Posted by Jacqueline Donnelly at 10:43 PM

Your photos are always like a trip home in the summer (Clinton County, Lake Champlain) for me! Love those blackcaps, my mother makes the best jam from the ones that we have at camp...yummy on Cheerios too.

Hi Jackie, A bit late trying to catch up, but I wanted to say how great you did capturing the white
details in your flowers. A note about the narrow-leaved cattail, too: I believe I have seen them in the Towns of Greenfield and Wilton, too. I can't get home for a few days to check on them, so here's a link to a shot of one in Winter, to see if you agree with me on the ID. http://www.naturephotographers.net/imagecritique/ic.cgi?a=vp&pr=139409&CGISESSID=64d4f29873d9e5a9cffc82a5928d782e&u=14003

Hi Caroline, thanks for stopping by. I love those blackcaps, too, although I also associate them with deer flies buzzing my head. Your visit also reminded me to visit your beautiful blog with wonderful, imaginative photos. I urge my readers to check it out by clicking on Caroline's name.

Hi Wayne. I believe you're right, that the Narrow-leaved Cattails are not that rare. It's just that I don't find them very often. Yes, your photo sure looks like the cattail in question, with that naked staminate stalk surmounting the narrow head.

I find cat tails to be beautiful because they are slowly being overtaken by those pesky phragmites. Interesting fact about cat tails - Out of anything natural or man made they are the best known filterer of heavy metals out of water.