The weather was mild and pleasant today, so when my friend Linda called and invited me for a walk, I of course said You bet, let's go. She had only an hour or so to spare, so we chose a couple of short trails close to town: the trail to Lake Lonely and then a partial section of the Bog Meadow Nature Trail. Here, Linda gazes across Lake Lonely from the observation deck at the shore. 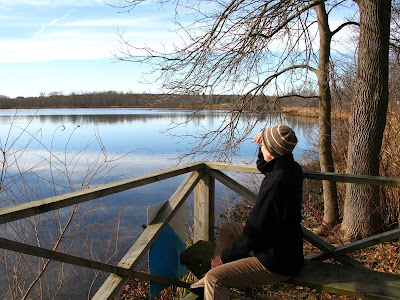 Lake Lonely is a small quiet lake that lies just west of the much larger, busier Saratoga Lake. We reached the lake by a public trail that adjoins the Saratoga National Golf Course just east of town. (There's also a lake called Desolation that lies to the north of Saratoga Springs, joining Lonely and that well-known Lake Woebegone in a list of sad-sounding names for bodies of water.)
With the landscape now a study in various shades of brown, any brilliant color sure stands out. This Panicled Dogwood bush looks like it's sprouted a bunch of bright pink blooms. 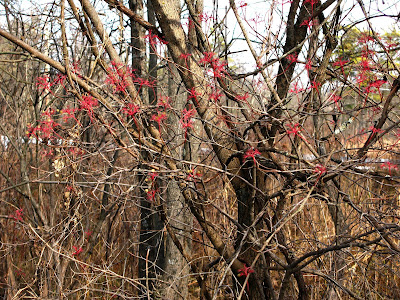 But of course, the sprays of bright pink are the pedicels that bore the formerly white berries (now shriveled and yellow). 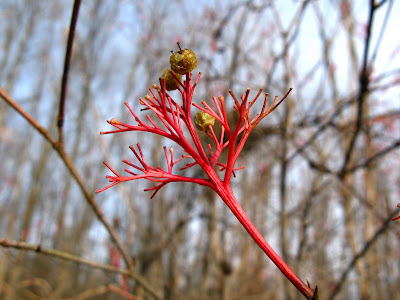 Even though their summer colors have faded, many flowers have seeds that are still attractive. This Flat-topped Aster, for instance, with its little puffs of white silk. 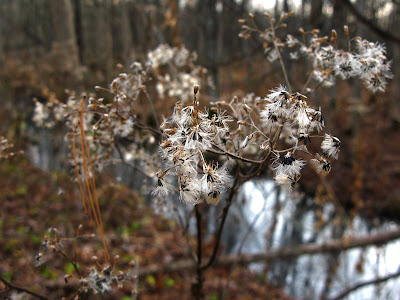 Or this seedhead of Swamp Thistle, which looks like a jaunty cap atop a fringe of blonde bangs.

The cattails around the pond at Bog Meadow have split their sausage-shaped seedheads to spill their down. In fact, it looked like a snowstorm today, with the down afloat on the air and piling up in drifts at the water's edge. 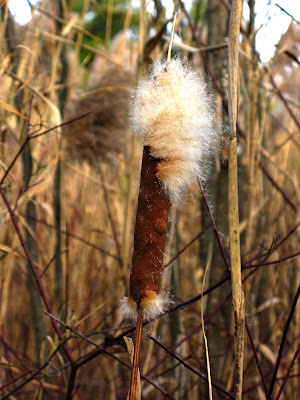 This Northern Willow Herb has also split its seedpods to release its down. I love how the pods form such sprightly curls and tendrils. (The red stalks behind belong to Red Osier Dogwood.)

Finally, here's a mystery. The bare stalk stood about three feet high in a damp marshy spot, with the seedpod split neatly into three parts. At first I wondered if this could be the pod of Blue Flag, which flourishes in this area during the spring. But those pods are longer and tend to occur in bunches. This one was solitary. I'll have to keep watch to see what blooms here next spring or summer. 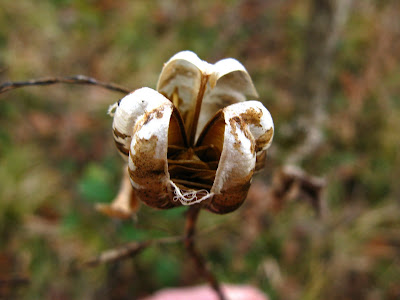 (Darn! Why didn't I think of it? This pod still contained a few seeds. I should have brought a few home to plant in my garden, and then I'd know for sure what flower this was. By the size of the pod, it might have been big and showy. I'll have to return and see if any seeds remain.)
Posted by Jacqueline Donnelly at 7:07 PM