Scrambling Around the River's Rocks

I was going to stay home today and do yardwork, but a call from Jackie Callahan changed my mind. Let's go for a hike somewhere, she suggested, and of course I said, Sure, let's. A little too cool and breezy it was for a pleasant paddle, but just right for a clamber among the rocks that line the shore of the Hudson. Jackie had never seen "my" favorite shores, where the river runs back behind a forested island, and rocky promontories thrust out into the water. So I took her there. 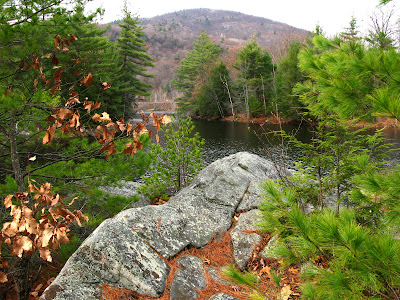 We hiked through the woods and climbed across boulders to reach a promontory I call "Bear's Bathtub" (named for a deep depression in the rocks where water collects). Here's Jackie in a typical pose, attempting to focus on a cluster of Wintergreen plants growing out of a seam in the rock. 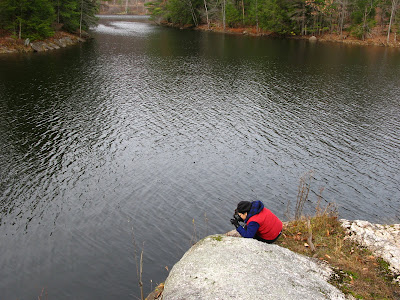 Another plant we found growing out of the rocks was this late-blooming Pale Corydalis. This cousin of Bleeding Heart just keeps blooming and blooming, sometimes even after it's dusted with snow. 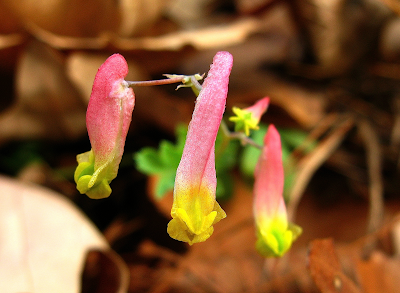 This promontory is carpeted with Wintergreen, or perhaps we should call it "Winter-red," since many of its leaves turn this lovely shade of burgundy. I thought it looked especially pretty mixed with clumps of Reindeer Lichen. 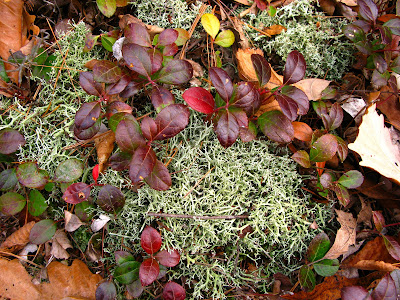 Clusters of Meadowsweet still held their leaves and spent flower-heads. Their color is such a vivid mix of yellow and orange and pink and a touch of green, I couldn't resist posting another photo of them. (Be sure to click on this photo to enter the heart of their fire.) 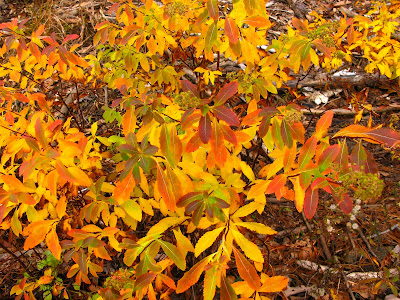 Less vividly colored, but possessing their own kind of beauty, these Hemlock cones resemble little brown roses. Many Hemlocks grow on these rocks and in the woods along the shore, offering both food and shelter for the flocks of Chickadees that were calling to one another amid the boughs. 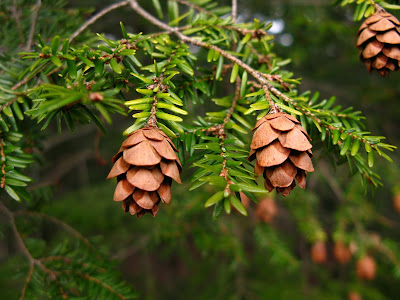 Other adventures awaited us along the shore. I'll recount them in my next post.
Posted by Jacqueline Donnelly at 10:18 PM

The Hemlock cones are so beautiful, like little ringing bells in the trees, and the Meadowsweet was a sight to behold, which you captured so beautifully! Thank you so very much for the ramble!

Love the photog of the Wintergreen with the Lichen. Wouldn't that be beautiful for a centerpiece! Wow.
(Hemlock is great too).

wow the meadowsweet just warms up the air, what fantastic shades of color.
wish I had been able to go with you - how was the walking (is it swampy there?)
soon it will be eagle time!

To Jackie and Ellen and desertnutmeg and suep: Thanks, friends, for your kind comments. Isn't it amazing how, in a landscape that looks so dull from a distance, we can find such dazzling beauty on closer inspection?

Regarding the walking: yes, there are swampy spots, but we found easy ways around them.