Ellen wanted some Northern Spies and I wanted Ida Reds. So we went together today to Saratoga Orchards in Schuylerville, and what a day it was to be outside! The sky was a clear radiant blue, and a bright sun warmed the cool air of late October. Our apple purchases stowed in the car, neither one of us wanted to go back home, so we continued our outdoor adventures along the Old Champlain Canal Towpath that parallels the Hudson River at Schuylerville. 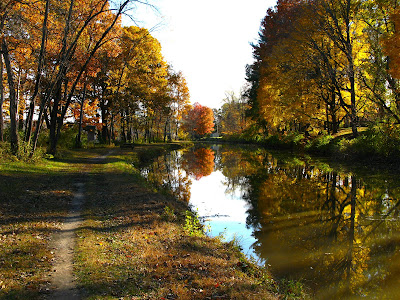 The Champlain Canal was built in the 1830s to connect the Erie Canal at Waterford with Lake Champlain 60 miles to the north. Although the southern portion of this canal is now re-routed to the Hudson River, the original hand-dug portion, where mules once pulled barges along a towpath, still follows the course of the river and makes for a beautiful walk in any season.
At one point along the old canal, we found the crumbling ruins of one of the original locks. 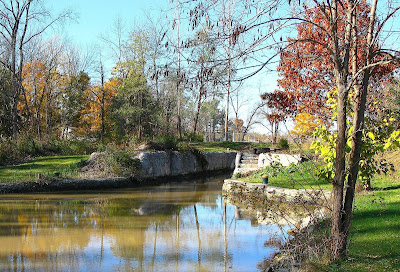 Out on the Hudson, the modern locks still assist commercial barges and pleasure craft to navigate around the many falls and rapids of this part of the river. 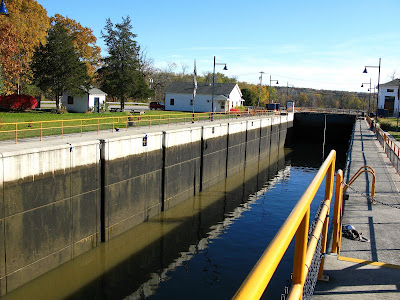 We passed through a lovely little park, with shelters for picnic tables and a remarkably pretty playground for children, with a stepping-stoned path consisting of colorful mosaics. 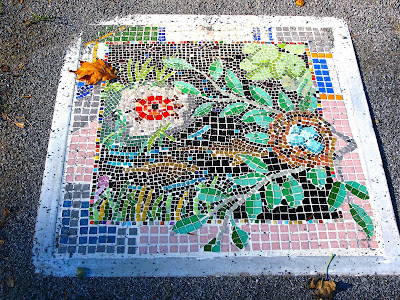 An old iron bridge, now closed to all traffic, crosses the river near Lock C-5. We walked out on the bridge to gaze upstream to where flocks of geese gathered around the rapids. 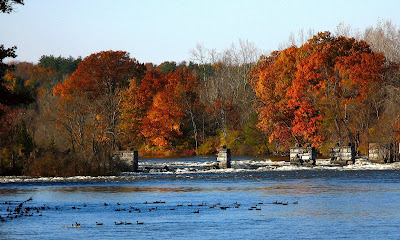 This brave little aster had found its niche among the open decking of that bridge. 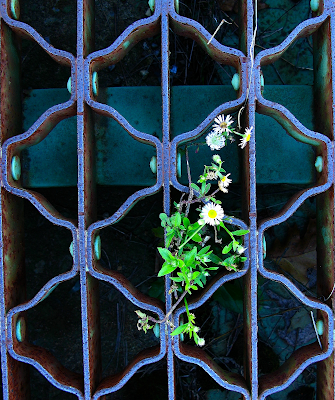 Sharp-eyed Ellen saw this tiny crab spider clinging to a strand of silk just before I plowed through it, unseeing. She managed to find the spider scrabbling about on the ground and raised it -- now clasping a blade of grass -- to eye-level where we could study it.
This is the smallest crab spider I've ever seen, its body maybe a quarter inch across, not counting the legs. Is it a baby, or are the males this tiny? These spiders don't capture prey in a web, but lurk among the petals of flowers and pounce on passing flies and wasps and bees, chomping down with sharp fangs and sucking out their fluids. (If you want to see a crab spider in action, look at my blog post for June 13). This little guy will have to grow some before he (she?) can capture wasp-size prey.
Posted by Jacqueline Donnelly at 9:45 PM

That bridge decking is gorgeous - both the front exterior surface and the interior walls. First rate.

What a lovely, golden day. When fall weather is good, it's really, really good.

I love the photo of the aster on the bridge. Beautiful!

Excellent photos, Jackie - so many of mine came out over exposed. And your photo of the aster on the bridge...I thought at first it was a flower growing on an ornate door gate! Perspective...the most important word in the English language...makes a world of difference in photographs!

Thank you, dear readers, for your kind comments. I, too, just loved that aster/bridge deck photo, especially the blue/green color and Spanish-tile shape of the corroded metal decking. Then add the mystery and marvel of how that aster found sustenance in that barren setting.

Ellen, you posted some great shots of our walk on your own blog. I almost always find I need to cut the exposure down two notches when I shoot. If the photo's too dark, I can lighten it later with my computer program, but if it's overexposed, there's no way I can add the detail that got bleached out.