Each Columbus Day Weekend, I volunteer to help close camp at Pyramid Life Center, a spiritual retreat center on Pyramid Lake up north in the Adirondacks. This year, I won't be able to get there until Monday, so I'll miss out on all the camaraderie of sharing the work for a place we all love. I love this place for many more reasons than the natural beauty of its setting, but it sure is beautiful there. Here are three photos I took of the lake a year ago. 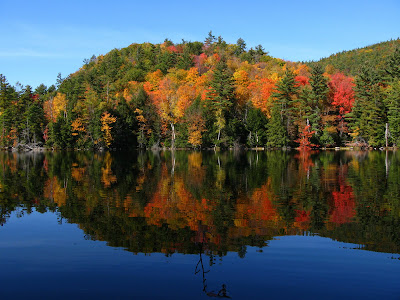 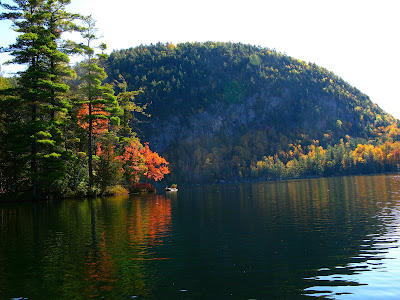 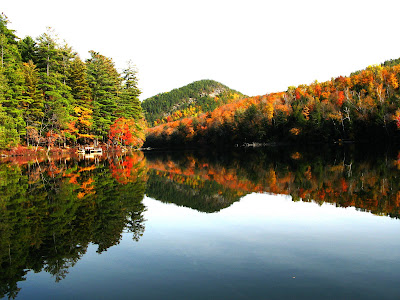 I first visited Pyramid Life Center in August 1991, after the first President Bush had started the first war in Iraq and my fellow Americans were beside themselves with glee that our troops were slaughtering Iraqis by the hundreds of thousands, with very few casualties on the American side. I wondered if I was the only American who was not rejoicing. Then I learned that Father Daniel Berrigan, the Jesuit peace activist, poet, and scripture scholar, was offering a retreat at PLC, and I signed up to attend. My life has never been the same.
At this retreat, I found many, many fellow souls who also grieved our nation's propensity toward war, spiritual companions who helped me find the courage to enter a new kind of life. At the time I was working in the field of public relations, quite well paid, and thoroughly embedded in a system that honored power and privilege. My job was to pay attention to "important" people who had done "significant"things. But what about "the least of my brothers and sisters"? So who cares? But at Pyramid Lake, I found lots of folks who did care: social workers, youth advocates, community organizers, drug counselors, Catholic Workers, nurses, nuns, and peace activists from many different faith traditions. In short, the kind of folks who lived radically, but weren't nuts. I looked and listened and said to myself: I could live that way too.
I left my old job and trained as a Certified Home Health Aide, the very humblest kind of work but the kind that touches the lives of others most personally (and especially, my own!). My goal from the start was to work with Hospice, but the first year during training I worked with many Social Services clients: the elderly, poor, and disabled. A child of privilege myself, I had no idea what it was like to be poor in this country: the callousness or outright hostility of some case workers toward their clients; the judgmental scrutiny in the checkout line when I used clients' food stamps to buy their groceries; the hard choices some had to make between buying food and medicine.
Not all my Hospice patients were monetarily poor, but they all stood to lose all they owned. In the face of that most radical poverty of all, different folks responded in different ways, but most began to live quite authentically, dispensing with peripherals, and attending to what was most important in their lives. I felt enormously privileged to witness their courage and faith and strength, to walk with them and their families on their final journeys. I could write a whole book about my Hospice experiences, but the most important rewards for me were these: I learned how to live without fear of death, I learned how to tenderly love even folks I might have disliked, I learned you could live very well with very little, and above all, I learned how to live from the very center of my being. My faith, my politics, my skills, my joy -- all came into balance at last.
It all started at Pyramid Lake.
Posted by Jacqueline Donnelly at 9:36 AM

it was so nice to see you yesterday. the pictures are awesome. i will try to follow your adventures as much as possible,i may even take a journey with you sometime.

John, I too was delighted to see you again. Any time you want to go for a hike or paddle, just give me a call.

This is a very moving, radical (gets to the root!) post. Thank you! And congratulations on taking the path less traveled. You illustrate that path so beautifully with your blog. More and more I see wild true nature is not just birds, trees, etc., but within us.

As awlays, you say it so beautifully, Jackie! Pity there aren't more folks out there like you - the world might be a very different place!

I've been reading steadily back through your blog and enjoying the beauty of the things you discover and your joy in them and it's been so lovely. I read this and I find a new depth to the beauty. I'm on the verge of gushing here, (which for a Brit and an English person at that would be almost improper) but YES, yes to all you write here! I'm somehow not surprised that you live according to these ideas, but thank you, thank you for saying them out loud.