An Autumn Paddle along Two Creeks

When my friend and fellow blogger Jackie Callahan called this morning to invite me for a paddle along her favorite creek, I almost said no. I mean, once in a while, I do have to do some housework. And the weather was a little iffy: kind of cold and windy, with scuttling grey clouds obliterating the occasional sun. But gee, life is short, every creek has its pleasures, and friends are far more important than cleaning house. So off I went toward Schuylerville and her home right on the banks of the beautiful Fish Creek. 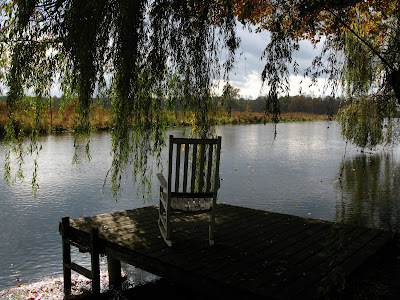 The view of Fish Creek from Jackie's deck
And off we went together, she in her kayak, I in my tiny canoe, struggling along the windswept creek until we turned off into a much smaller, wind-protected stream called Sucker Brook. There the banks crept close and the paddling was easy, allowing for leisurely moseying. 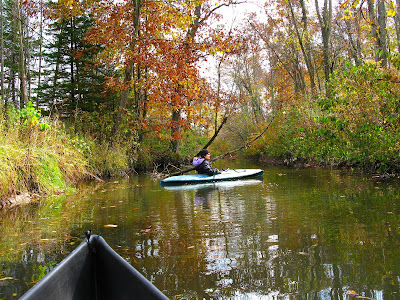 Beyond the banks on either side stretched open marshy meadows with only occasional large trees. This splendid oak loomed over us, reaching its branches low to graze the ground and seeming to embrace us as we passed underneath. Its leaves looked like Chestnut Oak, with rounded lobes, but I've never seen a Chestnut Oak so spreading, so monumental. But then, I've only seen them crowded among other trees where they grow along the Hudson at Moreau. This solitary tree had room to spread its branches wide. 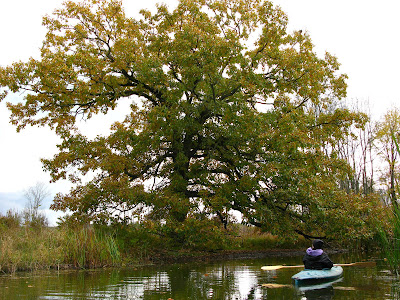 Very few flowers remain in bloom this late in autumn, but part of the fun now is trying to recognize the flowers gone to seed. This Turtlehead stalk has ripening seedheads that look like they're carved out of jade. 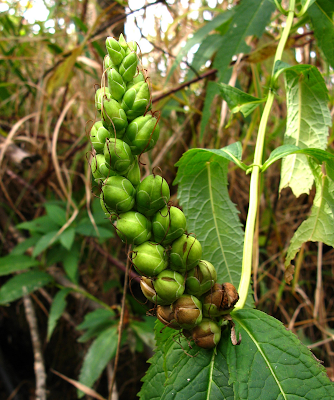 This mess of Arrow Arum pods looks like someone has laid in a store for the winter. Although I've occasionally seen single seed pods burying their pointed ends in the muck, I've never seen such a quantity heaped together. Although another name for them is "duck potatoes," it's kind of hard to imagine ducks pushing them all together in a pile. But stranger things have been know to happen. 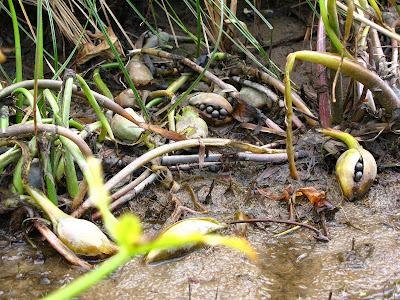 Here's a puzzle I hope my readers can help me with. I see these big leaves often, growing in wetlands, but I've never seen any flowers, so I don't know how to identify them. They grow in emergent clumps like Arrow Arum or Pickerel Weed does, with leaves as large as 16 to 18 inches. And as this photo shows, they turn a pretty color in autumn. Anybody know what this is? 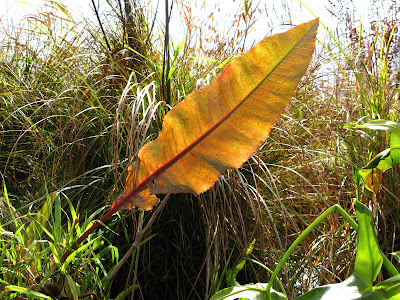 Posted by Jacqueline Donnelly at 11:09 PM

Can't help you on those leave but I think those "duck potatoes" are pretty cool. I love to see seed pods...thjey have their own elegance. I enjoy seeing what it is like up your way. Take care. And I love Jackie's blog as well, thanks for the link.

It was so fun to see our outing from your perspective. I love the way we both talked about the same outing, but each from our own unique perspective. Thank you for yours!

Those leaves in the marsh look like great water dock, Rumex orbiculatus. I'm stuck in the office and botanize through your blog.

Squirrel, Allan, Jackie, and Steve: Thanks for stopping by and leaving your comments. It's always good to hear from you.

Steve, I kind of thought that big leaf might be dock of some sort, but I have never seen the distinctive dock seed plume along with the leaves. I'll look more closely next year.