A Windswept Walk along the River 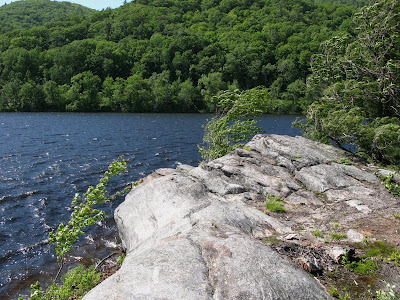 Whitecaps and wind-whipped branches:  not a good day for a paddle
The sun came out today after lunch, so I hastened up to the Hudson to enjoy a paddle.  Yes, I knew the wind was heaving the trees around, but I thought the sheltered area around Bear's Bathtub would be OK.  Well, it wasn't.  Limbs were crashing down all around me, and I knew if I left my canoe on shore, the wind would blow it away.  So I just walked around a bit, avoiding widowmakers in the woods, and scrambling out on the windswept rocks along the river.  I found a few pretty flowers, but not the abundance of shore-hugging beauties I expect this time of year. The river is so high, the Small Sundrops and Tall Buttercups and Blue-eyed Grass and masses of Blue Flag have no place to grow. Let's hope the river settles down soon, before these flowers give up for the year.
I did find one splendid Blue Flag, but not the masses and masses I usually find all up and down the shady banks.  They don't mind having their feet wet but don't like water up to their necks. 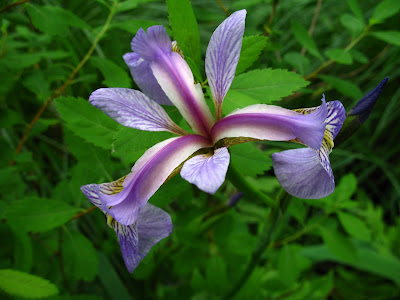 One solitary Blue Flag, beautiful enough all by itself to make the trip worthwhile
High and dry, in a crack in the rocks, I found  pretty Pale Corydalis.  This flower is a relative of Bleeding Heart, so I nick-named it Pissing Kidney.  What disrespect for such a lovely bloom! But you get the picture.
Pale Corydalis also has soft green lacy leaves, but I couldn't fit them in the photo.
I wasn't expecting to find it here, so I almost stepped on little Bicknell's Cranesbill (Geranium bicknellii), a much smaller cousin of the much more common Wild Geranium (Geranium maculatum).  This is only the second place I've found this plant in Saratoga County.  It's possible it grows abundantly in other spots, but I just haven't seen it.
Bicknell's Cranesbill bears a family resemblance to its cousins Wild Geranium and Herb Robert.
On the way home I spotted these masses of Birdsfoot Trefoil, a very common alien clover, but such a gorgeous yellow and they grow where almost nothing else will, like dry sandy roadsides.  They made a lovely foil for the spikes of Wild Lupine crowning the bank above them.  The wind was whipping these flowers around, so I couldn't get the kind of photo I wanted, but I thought they were so pretty I wanted to post their photo here. 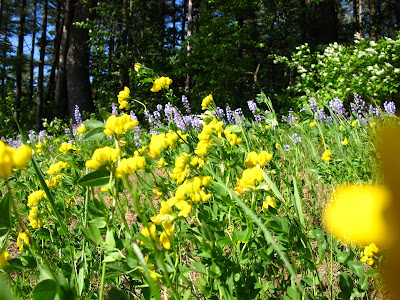 Our birdsfoot trefoil, hawkweed, buttercups, and cinquefoil all popped out this weekend. Very cool. And to top it all off, I saw a bittern flying across the road Friday as I drove past some marshes en route to Glens Falls. I think that's the first bittern I've seen...I may blog it for the Almanack.

Very cool, indeed, Ellen. I haven't seen a bittern for over 55 years, and then it was just once. I saw him craning his neck and beak straight up, pretending to be a cattail. He was pretty good at it, too. But I had much keener eyesight when I was twelve.