Where Have All the Flowers Gone?

Glaucous Honeysuckle, one of our native American honeysuckles
My flower journal told me Glaucous Honeysuckle (Lonicera dioica) should now be in bloom along Bog Meadow Nature Trail just outside Saratoga.  This woody vine with orange-purple flowers and terminal leaves that grow together to form a cup is one of our native honeysuckles.  It's often hard to see among the overbearing alien honeysuckle shrubs that line that trail. But for years I've found it in the same spot, between a beaver lodge and a wooden bridge.  Not today.  Not a sign of it.  Maybe the beaver cut it down.  That was the only one I ever found in Saratoga County.  And now it's gone.  Too bad.
Oh well.  I consoled myself with a search for Buckbean (Menyanthes trifoliata), heading for a woodland pool where I've found this water plant for the past five years.  And I did find it.  But only two, where in past years I've found a dozen or more.  It's quite a pretty flower, all fuzzy, the insides of its petals bearded with white hairs.  Once again, this Bog Meadow Trail is the only place in the county I've ever found it.  I hope it comes back next year. 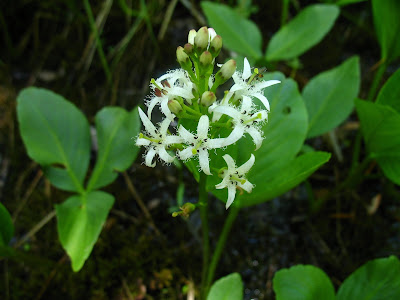 Buckbean grows in standing water
I next went in search of Nodding Trillium (Trillium cernuum), a pretty white nodding flower with a pinkish center.  And yes, I did find it.  Two of them.  Three years ago there were more than ten in an area near a bench, but a mower came along and cut them all down before their leaves could help them store up food for the following year.  They've been struggling back, but I wonder if they will ever be as abundant as before.
You have to lie down and look up to see Nodding Trillium's pretty face.
So I was feeling kind of glum.  Over the years, these plants have become like friends, friends I enjoy getting back in touch with each year.  And just like in the rest of my life (where death and divorce and distance carry friends away), I feel sad when these friends disappear. (All three of these plants are classified as endangered or threatened in a number of states.)  I headed home, deciding to stop at the farmers' market to cheer myself with some fresh asparagus.  And would you believe?! -- a new vendor at the market this year was a nursery called "Wildthings Rescue Nursery," specializing in "Native woodland restoration and native gardens."
Well, you can imagine what fun I had, comparing notes with a fellow flower nerd named Dawn Foglia. (Yes, that's her name!  Really!)  And I bought some things, too: Tiny native iris (two blue, one white) and a trillium I've never found in the wild, Toadshade (Trillium sessile).  I'm trying to create a native woodland garden in my back yard, attempting some tiny compensation for loss of habitat that leads to the loss of native flowers.  I'm having trouble convincing my resident squirrels to go along with this plan.  Which is why I'm smiling as I type the website of Wildthings Rescue Nursery:  ThoseDarnSqurls.mswin.net 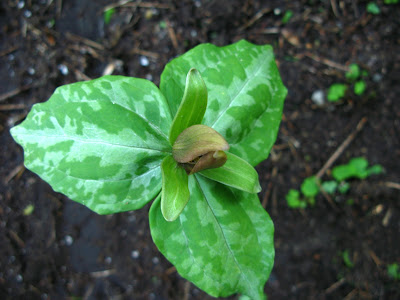 Toad Trillium, or Toadshade, although native to New York State, is not usually found in Saratoga County. But now it's found in my backyard.
Their place is in Valley Falls, NY, and they offer the "largest selection of North American native plants, including eight  trillium species." I hope to visit their farm some day, but in the meantime I'm happy to scroll through all the great plants listed on the website.  It's reassuring to know that as my wildflower friends disappear from places I used to find them, I can plant some of them right here in my own garden.
Not that a garden is any substitute for loss of natural habitat, with all its concomitant critters and fellow flora.  We have to do all we can to save what's left.  It's not just my loss that Glaucous Honeysuckle can't be found around here anymore.
Posted by Jacqueline Donnelly at 8:32 PM

Hi Woodswalker, great blog you have here. One of my co-workers just brought it some Lonicera dioica (but the hairy subspecies) for me to identify. It was just in bud, not in bloom, in the center of OHio.

Buckbean is quite rare in Ohio, and T. cernuum is a mega-rarity- I believe that it has been over 100 years since it was spotted in our state, but I keep looking. It is a really beautiful plant though, great pictures.

Tom: What a pleasure to make your acquaintance! I browsed through some of your blogs and I am impressed by the breadth of your interests and your talents. I hope I can call on you as a reference when I find stuff I don't know the name of. Thanks for stopping by.

Road trip! Where was this market you went to? Will she be there all the time, or is she hit or miss?

I was at the Albany Pine Bush Thursday and I kept thinking how you would enjoy botanizing along their trails - they are doing so much restoration work there that I left with a feeling of hope for the future.

NatureGirl: Dawn Foglia, of Wildthings Rescue Nursery told me she will be a regular vendor at the Wednesday afternoon farmers' market in Saratoga Springs. The market is open from 3 to 6 pm. I can't remember the name of the street but it's two blocks east of Broadway, toward the north end of town.