A Walkabout in Warren County 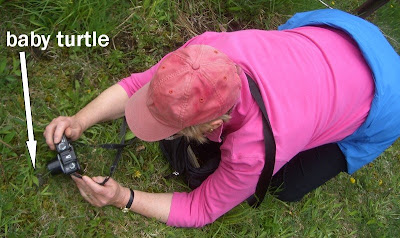 I look pretty funny, chasing a tiny turtle through the grass.  (Photo by Sue Pierce)
I crossed the Hudson to Warren County today, where my friend Sue Pierce showed me around her haunts between Glens Falls and Glen Lake.  At the end of her street, we wandered a beautiful open meadow, where Meadowlarks and Bob-o-links had managed to make a home, despite housing developments that stretched as far as the eye could see.  Sue knows the songs of these birds and ID'd them for me.  She actually saw the Meadowlark, but of course I could not make it out, even with binoculars.  That's why I have to learn the birds by song.  Thanks, Sue. 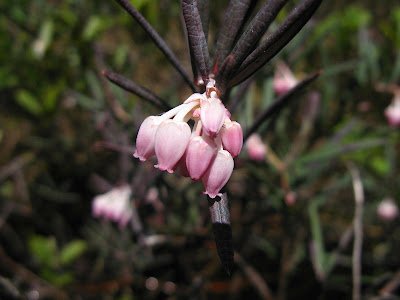 Bog Rosemary will only grow in acid, boggy sites, like the one we went to today.
We then went to a marsh with a boggy shore, where Bog Rosemary and Leatherleaf grow, a lovely little wetland hiding out in the shadow of Six Flags Great Escape amusement park.  It seemed the amusement park was a hundred miles away.  Real bogs are few and far between in Saratoga County.  I'm happy to know about this one so close to my home.  I'll be back with my canoe.
Our next stop was a bike path that ran between Glen Lake and Lake George, with a fern-banked, tree-shaded woodland stream singing along the same route.  The high point of our adventure there was discovering a  silver-dollar-sized Painted Turtle, crossing the bike path, making its way to the stream.  Sue took that picture of me up there, trying to take the turtle's picture as it hustled quickly through the grass. 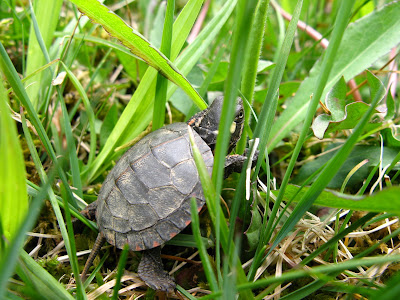 She then obliged me by holding the little fellow still, so I could take its portrait.  Pretty cute, eh?  We then made sure it made it to the safety of the stream. 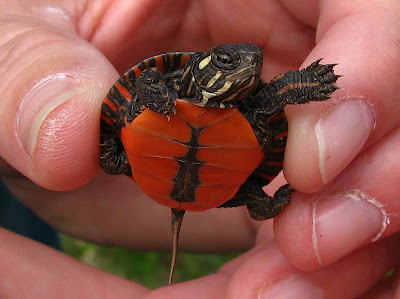 Posted by Jacqueline Donnelly at 9:05 PM

Wow - your blog will make me slow down and enjoy the (almost) hidden beauty beneath my feet and elsewhere!

How sweet (the turtle)! Hurray for herps!

What a nice blog...thanks Dawn for sending me here.