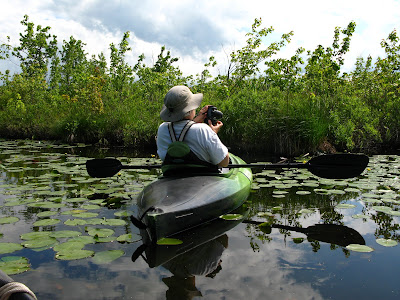 My friend Sue leads the way on a turtle hunt near Lake George.
A beautiful sunlit day after several with rain.  And what a wonderful way to spend it!  My friend Sue Pierce invited me along on a turtle survey she's participating in,  and of course I jumped at the chance.  We went to Dunham's Bay at the south end of Lake George and entered a beautiful wetland via a meandering stream bordered by acres and acres of Sweet Gale, Tussock Sedge, Leatherleaf, Cattails, Yellow Pond Lily and one solitary Pitcher Plant, glowing red among the sea of green.   The afternoon wind swept in from the lake, but close to the banks the water was smooth, reflecting a sky of radiant blue with cottony cumulous clouds and sweeping mare's tails.
Tussock Sedge waving in the breeze 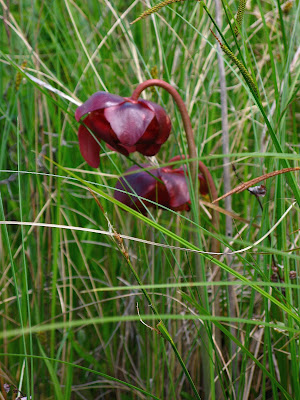 In all those acres of wetland, we saw one pair of Pitcher Plants.
Polaroid sunglasses might have helped me see under the water, but Sue did all of the turtle finding, pointing out one little Painted that I never saw and a nice-sized (maybe 10-inch) Snapper lazing just a few inches below the surface.  That Snapper just sat there for the longest time, craned his neck a little to take a peek at us peering at him, came up for air, then settled back down in the oozy mud, as if we were no concern to him.  What a cool fellow!  I tried to take his picture, but my boat kept drifting away when I laid my paddle down to pick my camera up.
I did manage to get some bug photos.  One was a dragonfly nymph skin, still clinging to the lily pad where the adult had emerged and flown away. 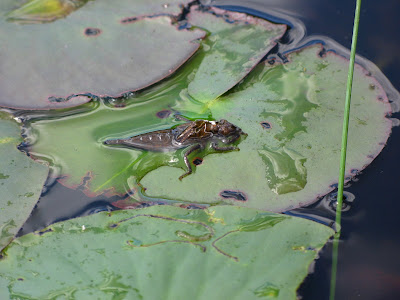 Another was a Giant Stonefly, running, running, running along a bike path we visited on our way home.  This bug is BIG (more than 2 inches), but for all the wing this critter carries, it rarely takes to the air, preferring to escape on foot if it can.  We managed to stop it in its tracks for just a second to take its photo.  Click on this photo and check out that magnificent thorax!  It looks like metal embossed with fleur-de-lis, like a royal prince's armor.  I had never seen a Giant Stonefly before, and let me tell you, I was impressed!  That's some bug!  But despite its size, it's nothing to be afraid of.  It can't bite.  In fact, it has no mouth.  It doesn't eat.  Hatches, mates, lays eggs, and dies.  No wonder it was running, running, running. For this guy, life is really short. 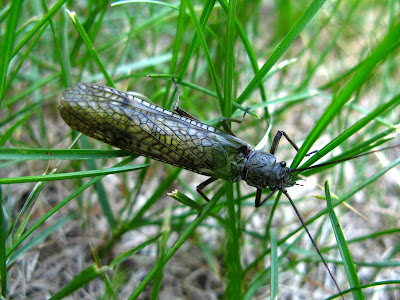 Posted by Jacqueline Donnelly at 9:09 PM

Very Cool pics! I wish you had called - I would've loved turtle hunting with you! But, you had no way to know I was "on vacation" and available to visit. Oh, well.