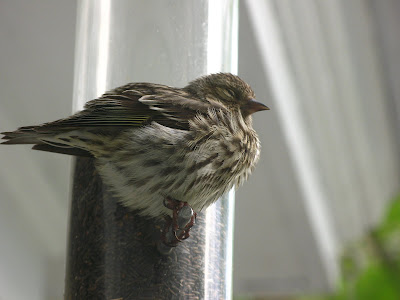 For the past couple of weeks, I've noticed one really fat Pine Siskin among the few still hanging around our backyard feeders.  Unfortuneately, I now realize that there may have been several "fat" ones, not just one, and what looks like fat is really fluffed-up feathers on a shivering, starving bird.  Just before it dies.
Curious that the puffy siskin might be suffering some metabolic disorder, I Googled "pine siskins diseases" and found a Cornell University site that alerted me to what this disease may be:  Salmonellosis.  It's caused by Salmonella bacteria fouling feeders and birdbaths, exacerbated by the huge numbers of Pine Siskins that descended on our area this past winter.  These bacteria are transmitted primarily by fecal matter, and as anyone who maintains a bird feeder can attest, there's plenty of avian fecal matter out there.
So my work is cut out for me.  All feeders are coming down, at least for a week or so, to encourage the remaining siskins to disperse (concentrated populations enhance the spread of the disease).   Then I've got to shovel, sweep, rake, and hose down the area under the feeders, disposing of all the seed hulls and accumulated droppings.  All feeders and birdbaths must be taken apart, washed, and disinfected with a solution of chlorine bleach.  Then, according to all the bird sites I checked, I have to re-clean the feeders at least once a week.  In fact, I was supposed to be doing that all winter, anyway.  I'm sorry, little birdies.  I didn't mean to make you sick.
Here's the address of that Cornell site:
www.birds.cornell.edu/pfw/News/Salmonella09.htm
Posted by Jacqueline Donnelly at 9:38 PM