A Quiet Paddle, Out of the Wind 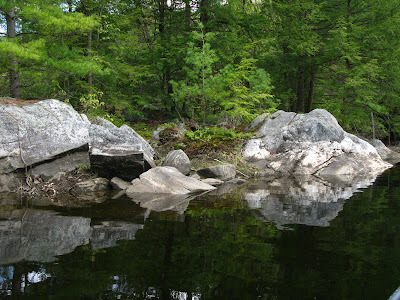 There's a place on the river so reliably calm and quiet I call it Shelter Cove.
Sunny and warm today, with quite a bit of a breeze.  I knew that the wind would be whipping up waves on the open Hudson, so I didn't paddle out there.  I launched my canoe at a quiet spot where the river runs behind an island, where a rising mountain and steep rocky banks keep much of the wind at bay.  And it was good. 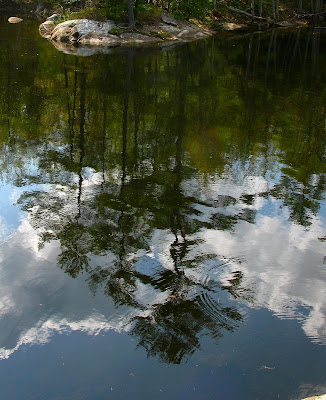 It was very good!
* * *
The first good thing was a forest floor just carpeted with Starflower (Trientalis borealis).  These dainty white star-shaped flowers have light green leaves that are also arrayed like stars, and  today they were intermingled with bright pink Fringed Polygala.  That sight alone was worth the trip.  But there was more. . . . 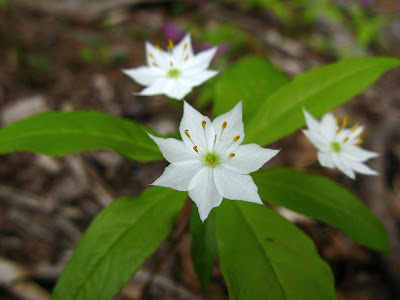 * * *
The next good thing was actually kind of icky.  There was a birch stump gnawed by a beaver some time ago (the wood was not freshly gnawed),  and it looked like someone had poured some kind of orange and white goo all down it.  Undoubtedly, this is some kind of fungus, probably some kind of slime mold, but not one that has a picture in my mushroom book. Anybody know what to call it?  Other than icky, I mean. (Click on the photo to get a good look at its texture.) 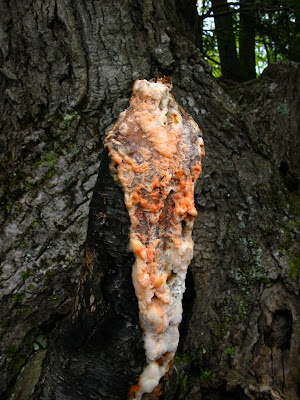 * * *
Here's something a little prettier, although once again I don't have a name for it.  Other than "a fern."  It's a tall one, with velvety stems, and it looks like a spore stalk uncurling there along with an orange-bordered frond.  Could it be Cinnamon Fern?  Or possibly Interrupted?  I know it's not Christmas nor Sensitive nor Maidenhair, which are also unfurling now. As always, reader input is most welcome. 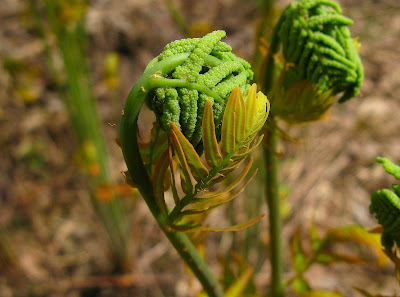 * * *
Lots of birdsong greeted me from the woods as I paddled along close to shore.  A Black-throated Green Warbler kept up his zee-zee-zee-zoo-zee all afternoon.  Two Canada Geese scolded incessantly with mighty honks, while an absolutely silent little brown bird scooted out of sight every time I drew close enough to see what it was.  A Great Blue Heron lifted off each time I focused my camera on him, but I did manage to chase this Spotted Sandpiper fast enough to get his picture.  His head's sort of in focus anyway.  His butt was constantly bobbing, bobbing, bobbing. 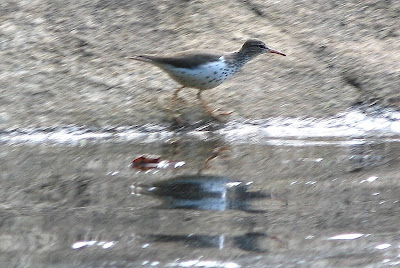 Posted by Jacqueline Donnelly at 8:20 PM