An Odd Lot of Flowers

Here's an odd lot of flowers I found this week but didn't have room for in other posts.  What a lovely variety of shapes and colors!
Painted Trillium (Trillium undulatum).  I found it near Lake Ann in the Palmertown Mountains of Moreau Lake State Park.  It likes a cooler climate than its cousins the Purple and Large-flowered trilliums. 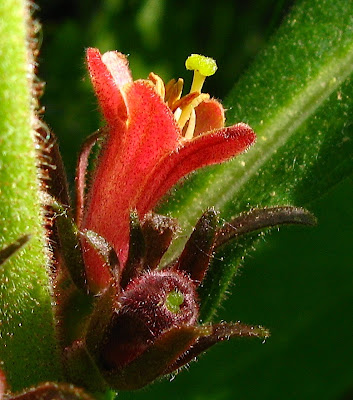 This is an extreme close-up of one blossom of Orange-Fruited Horse Gentian (Triosteum aurantiacum).  Lots of these plants grow in a sunny area near the Skidmore Woods.  Their fruits look like little orange tomatoes circling the stem.
Pale (or Bog) Laurel (Kalmia polafolia) grows by a boggy-shored stream near Eagle Lake in Essex County.  Click on the photo to see how some of the stamens are tucked into little niches of the petals.  When a pollinator lands, the stamens pop free and shake pollen on the visiting insect.  The stamens later curve down and re-cock their springs. 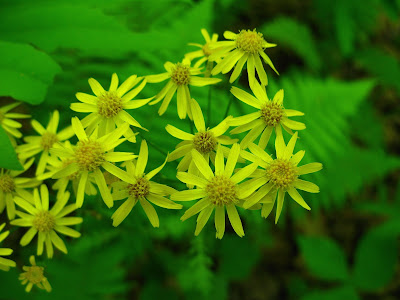 Golden Ragwort (Senecio aureus) lights up shady damp areas of the woods. I found these along a stream at Orra Phelps Nature Preserve. 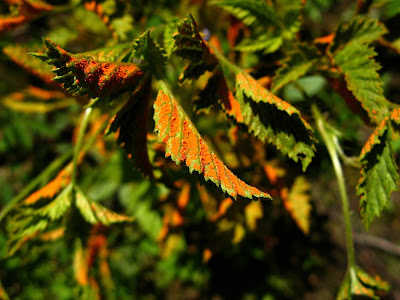 No, I know this isn't a flower.  It's some kind of crust that covers a bush (raspberry? blackberry?) on Woodcock Island in the Hudson River below Spier Falls Dam.  I wonder if it's related to the orange yeasty slime that I showed covering a birch stump a few posts back?  But this was dry, while that one was kind of slimy.  Colorful, anyway.
Postscript:  I got an email from a reader who suspects this orange crusty stuff is Gymnoconia nitens, a fungal plant pathogen.  This reader should know.  She has a wonderful blog, Swamp Things, so go check out the cool stuff she finds down south in North Carolina.
Posted by Jacqueline Donnelly at 10:28 PM

Your photography always is incredible!

I sent some of this orange stuff to the county extension folks last year...I'll have to go through my blog/notes to see if I can find it. Swamp4me is probably right - she knows her stuff!

Gymnoconia gets my vote, too.
Usually you see it on the Arisaema triphyllum, though. Really messe up the plant.

A couple lovely flowers I don't have in the woods in central Pa.