Maidenhair Fern (Adiantum pedatum) thrives in the Skidmore Woods and sets the color scheme for late May.
Just a few weeks ago, the forest was flooded with light, and the flowers that burst into bloom in that light were mostly highly colored:  Hepatica, Trout Lily, Columbine, Purple Trillium, Violets blue and yellow, and stunning white Bloodroot with its sunny yellow center.  By now, though, there's just one hue that dominates, and that is GREEN.
With the canopy now closed in, even the sunlight filtering through has taken on the color of leaves, creating a soft green glow and dark green shade. May Apple parasols, Wild Sarsaparilla, and ferns of every kind now cover the dry brown leaves left over from winter.  Even the flowers that are blooming now are mostly green.  As I entered the Skidmore Woods the other day, I met a walker coming out who noticed my wildflower book and said, "Oh there's nothing in bloom right now."  Well, yes, there are flowers in bloom.  But you have to really look to see them.  Here are just a few. 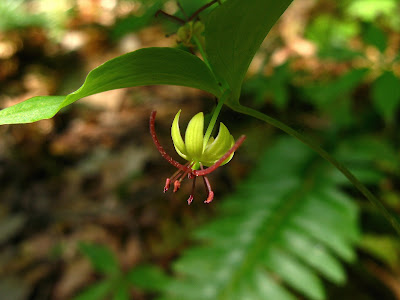 The spidery little greenish flower of Indian Cucumber Root (Medeola virginiana) dangles beneath the top tier of whorled leaves of this woodland plant.  It's easily missed if you don't bend down to find it.  I've read that its root tastes like cucumber, but please don't pull it up if you find it.  It's not a rare plant, but it's not that abundant, either.
Sanicle Snakeroot (Sanicula marilandica) seems to like the shadiest parts of Skidmore Woods.  I was lucky a little sun peeked in to give me ample light to take its picture.  There's another Sanicula species that grows nearby, Long-fruited Snakeroot (S. trifoliata), but I've never been able to get a clear photo, the shade is so dark where it grows.
Here's one you won't see very often, Green Violet (Hybanthus concolor).  I think the Skidmore Woods may be the only place it can be found in Saratoga County.   It certainly seems to like it here: hundreds and hundreds of these plants carpet a section of woods.  The flowers grow in the axils underneath the leaves, so you can't see them unless you lift up a leaf.  They don't look very much like violets, do they? 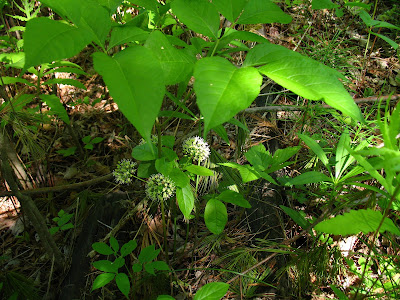 From rarely seen (Green Violets) to ubiquitous:  Wild Sarsaparilla (Aralia nudicaulis) grows just about everywhere.  Everywhere there's light shade in the woods, that is.  It's greenish-white flowers are borne in (typically) three umbels on a naked stalk separate from the leaf stalk.  I have seen more than three umbels to a stalk, once as many as six.  This plant is related to Ginseng (Panax quinquefolius), an endangered plant that also grows in the Skidmore Woods, but which blooms a little later.  (And I keep its whereabouts a deep dark secret.)
Posted by Jacqueline Donnelly at 8:54 PM