Back to the Garden Again

Okay.  I didn't really mean it.  I didn't give up gardening entirely, just because the critters ate my expensive shrubs (See post for May 2, "Garden Disasters, Woodland Consolations").  I had a $5-off coupon from my favorite nursery, and I couldn't resist.  Besides, it was Mother's Day, and I wanted some flowers.  My kids know not to send me any, because nothing the florist sends will bloom in the shade, and I have a shady garden.
Also, I'm really picky.  I plant only native species.  Why?  Because the native plants have co-evolved with the bugs and birds and other creatures that depend on them for food.  As fancier imports and genetically engineered varieties replace the native species in backyard gardens and city parks, our native animals have fewer and fewer places where they can live.  (I just wish I didn't have quite so many squirrels!) 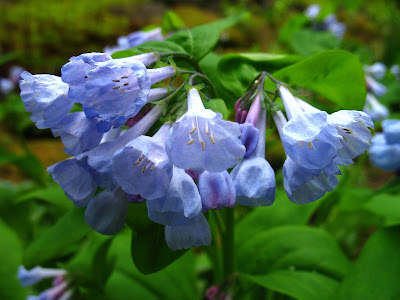 Virginia Bluebells, an early and abundant bloomer
There's a nursery near Schenectady that features native plants, so I drove down there and came back loaded with shade growers:  Virginia Bluebells (Mertensia virginica), Foamflower (Tiarella cordifolia), Green and Gold (Chrysogonum virginianum), and a Red Chokeberry shrub (Pyrus arbutifolia) to replace one of the two the rabbit ate last winter. 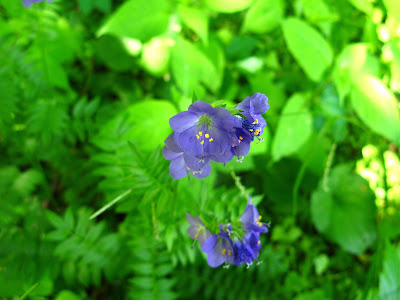 Jacob's Ladder
The rabbit and squirrels seem to prefer shrubs to herbaceous plants, so some of what I planted last year survived.  So far.  The Jacob's Ladder (Polemonium van-bruntiae) is now in glorious sky-blue bloom, as is the Wild Bleeding Heart (Dicentra eximia) in rosy pink. 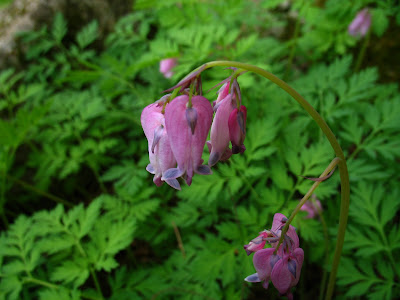 Wild Bleeding Heart
Less showy but really exquisite is Star-flowered Solomon's Seal (Smilacina stellata), small snow-white stars with leaves of the prettiest blue-green -- and spreading like mad!  Yippee!!!
Star-flowered Solomon's Seal
And here's a happy discovery:  I started to pull up the old chokeberry, only to find it starting to sprout new growth.  And the second one doing the same.  So now I will have three chokeberry shrubs, enough to make a grand blaze of color next fall, plus berries that last well into the winter (it takes several freezes to make them palatable to the birds).  This winter I'm going to encage the lot in chicken wire.  Will that keep the rabbit away?
Posted by Jacqueline Donnelly at 7:18 PM

it should do the trick, i would wrap fine wire mesh around young trees to keep the critters from munching the bark all winter.