A Week of Wild Cats 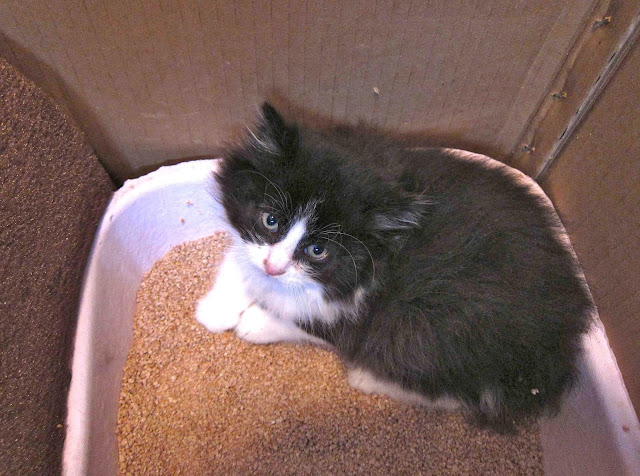 Just look at this sweet little fluffball!  A miniature Sylvester puddy-tat! He is one of four kittens of a second litter our back-yard feral cat bore this summer, and he really needs someone to love him forever.   Could that be you?  We are keeping him in a crate indoors, hoping to tame him enough to not be so afraid of humans, so that he could be adopted by a loving and patient person.  He is still very timid, but snuggles right into our arms when we hold him, and my husband even got a big purr out of him this afternoon. He is the softest kitty I have ever held!

We captured him yesterday and he has already been neutered, thanks to a wonderful low-cost neutering organization called HOPE (Hope for Orphaned Pets Exists).  His older brother, an all-black kitten born earlier last spring and pictured below with his mother and sibling, was captured last week  and released after neutering, because he was just too wild already to make a good house pet.  Mom cat is in the trap right now, captured today and awaiting a visit to HOPE first thing tomorrow.  (The long-haired black-and-white kitten pictured below disappeared shortly after this photo was taken in June, a fate that often awaits feral kittens left to fend for themselves outdoors.)

Two more kittens remain to be captured and neutered (the fourth littermate has already disappeared),  and we will also try to find homes for them if we capture them early enough.  They are already about 8 weeks old, so I hope we can trap them soon, while young enough to tame.  If not, we will release them to live out their (probably shortened) lives outdoors.  Our best hope is to slow the feral cat population explosion taking place in our own backyard, and by capturing mom, I think we have made a good start.
Posted by Jacqueline Donnelly at 5:33 PM

Bless you for taking care of those kittens and moma. If I didn't have an 11 year old cairn terrier I would take him.

I have a backyard of never ending feral cats, and I do the same ....it's heartbreaking sometimes, but it is the right thing to do. I applaud you for your efforts. If only more people would do the same. I have 5 cats to date, with one more lurking.

Glad you are helping out with strays..if you can tame them this easily, they aren't truly feral..Good luck & bless you!