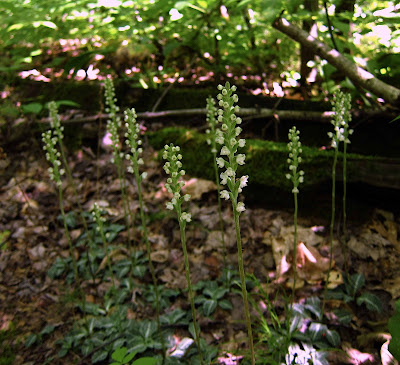 The Goodyera pubescens, that is. Otherwise known as Downy Rattlesnake Plantain, one of New York's nearly 60 species of native orchids. A very small orchid, but an orchid nonetheless. Here's a close-up view of one of its chubby little green-tipped blooms. 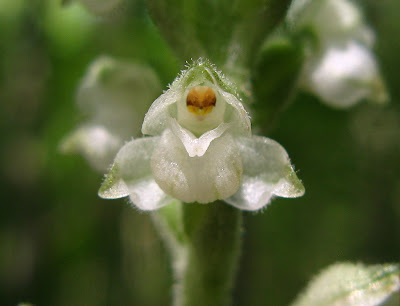 I've been keeping a watchful eye on this Goodyera patch along the Bog Meadow Nature Trail, ever since it got mowed down several years ago, and I'm happy to say it's doing just fine. Better than ever. Hurray!
Not much else was in bloom along the deeply shaded woodsy trail today, but I did see these nice fat buds on Swamp Thistle out in a more open swampy spot. The flowers of this native thistle are beautiful, yes, but so are the buds, with their intricate beadwork patterns that remind me of the delicate exoskeletons of sea urchins. If you look very closely at the buds, you can see the cobwebby tracery that sets this species of thistle apart. 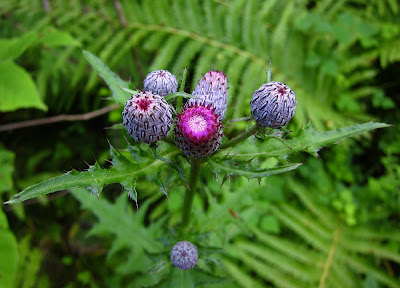 The fungi were also doing their bit to add color and interest to a woodland walk. This clump of little orange mushrooms may have been small (less than two inches high), but they certainly made their presence known when set alight by a stray sunbeam. 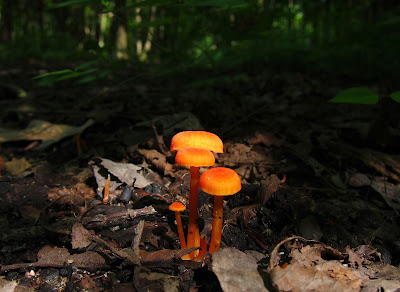 This is Yellow Spindle Coral, which also lent flashes of surprising bright color to a dark damp path. 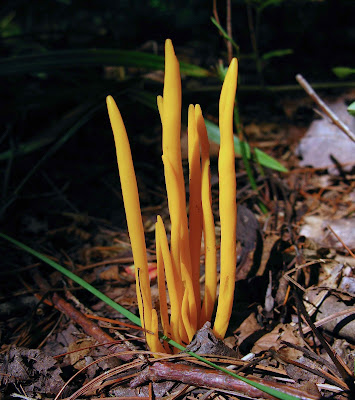 Hmmm. . . . Now how did they DO that? The fine stems of Hog Peanut were growing right through the dense hard flesh of this fungus. Well, since the peanut leaves were covering the ground a good deal before the fungus fruited, I'll have to assume that the fungus just formed around them. Could that be so? Wouldn't it have been fun to get a time-lapse video of how this came about? 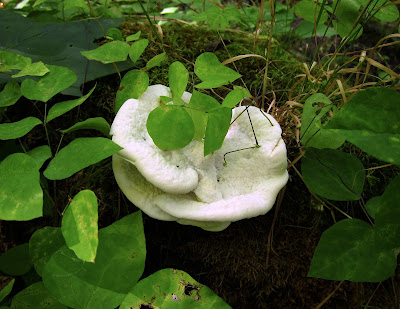 Posted by Jacqueline Donnelly at 9:54 PM

The plantain is lovely, but, oh that swamp thistle! That is just plain beautiful.

Well, you've been waiting for that orchid with leaves as showy as the flowers. I agree with Louise about the thisle. Thanks for noticing the intricate details and sharing them with us.

Excellent photos--I got some of those yellow spindle coral fungi in Pennsylvaia last week, but mine aren't as sharp as yours. I didn't bother posting them. Maybe I will. (If my computer will cooperate.)