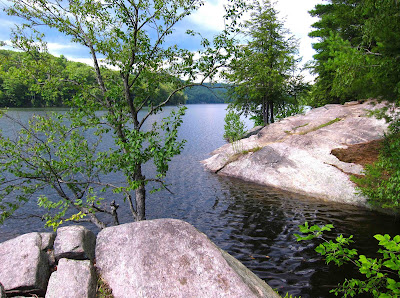 My son and some of his friends were visiting from New York City this weekend, and they went to "The Rocks" today for a swim. Would I like to join them there? Oh boy, would I! It's a beautiful spot on the Hudson, upstream from the Spier Falls Dam. Here the water is deep and cool right off some of the rocks, shallow and warm off others. Perfect for swimmers of every ability. And species. 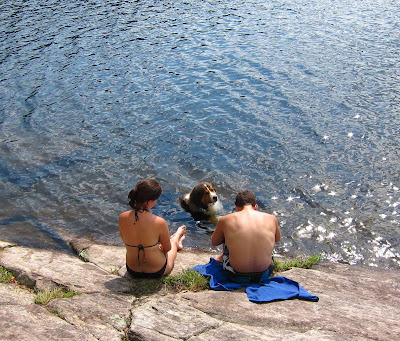 Laddie, a Bernese Mountain Dog-Great Pyrenees mix with a thick warm coat, had spent the hot morning climbing in the mountains above the river. He was very glad to immerse himself in that nice cool water. As was my son Steve, who'd been climbing those mountains with Laddie and Laddie's family. 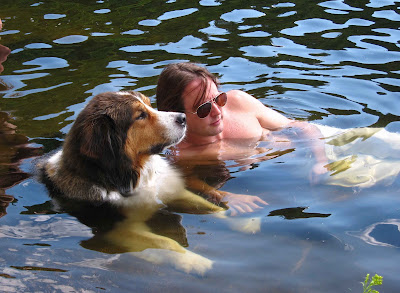 I didn't climb the mountain, but chose instead to paddle about on the river before I met the young folks on the rocks. One of the flowers I found blooming along the banks was this Virgin's Bower. As a flower, it's pretty enough, but its beauty paled in comparison to that of these cobalt-winged, jet-bodied wasps that were busily feeding on the flowers. 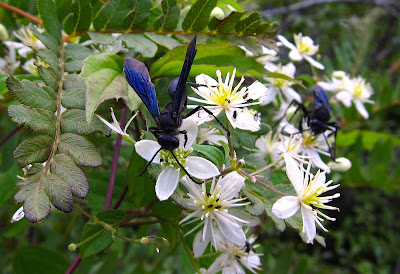 I usually feel a kind of aversion regarding wasps (too many nasty experiences while painting under the eaves!), but these wasps were so amazing I moved in close for a better look. How docile they were, and as beautiful as they were huge! 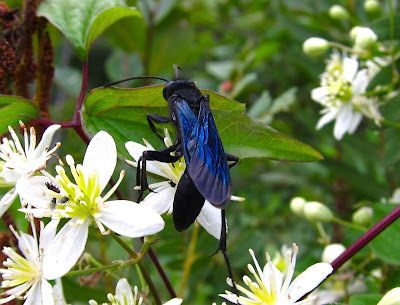 After searching the web for "blue-winged black-bodied wasps," I think I found a match in one called the Great Black Wasp (Sphex pensylvanicus), also known as Katydid Wasp, for its habit of killing katydids to feed its larvae. The adults, I read, are not aggressive and they feed on flower pollen, so there's no need to call the exterminator if you find them around your home. Just enjoy!
Posted by Jacqueline Donnelly at 8:57 PM

Stunning shots of those wasps! Most beautiful!

that chalet you see from the rocks is my mom's house & where I grew up.

Thanks, hikeagiant. I'm glad to know that someone else can think of wasps as beautiful.

Gretchen, I often gaze at that house and think how lucky are the folks who live there. What a beautiful spot!