Bog Hopping with Evelyn the Intrepid 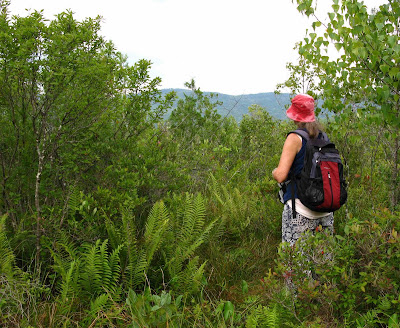 Monday was a real scorcher, a sweltering day when most folks would head to the lake or the air-conditioned mall or at least a backyard hammock in the shade. So what was I doing slogging through this hummocky bog, teetering from tussock to tussock, plunging up to my knees in muck, swatting at deerflies, bleeding from scratches that Black Spruce branches had clawed in my skin, mopping the sweat that stung my eyes and ran down the back of my neck? Well, I was following Evelyn Greene, that's what. A legendary bog hopper and intrepid botanizer, Evelyn is never daunted by such conditions when she's on the hunt, and despite my discomfort I felt mighty pleased to tag along. A friend had told her we might find a rare clubmoss out here, so that's what we were after.
And did we find it? No, but believe it or not, we still had a good time. For one thing, we found some more of that tiny Yellow Bartonia I'd found in a nearby bog last week, a plant that Evelyn thinks is quite uncommon. 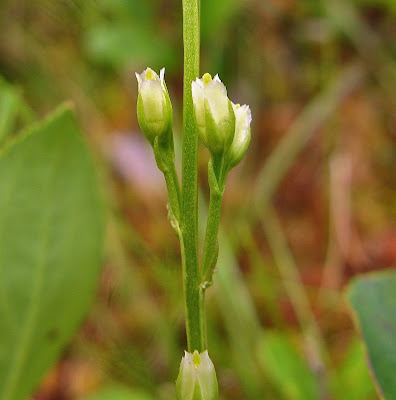 Evelyn spotted this tiny purple mushroom growing among the sphagnum, and I tried to take a picture of it, despite the poor light conditions. So, yes, the photo is blurry, but the lovely color comes through. 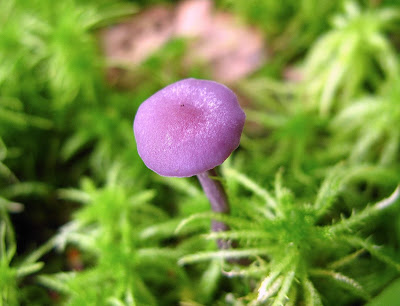 We'd come prepared, with gloves and long shirts, to push our way through stands of Poison Sumac, but we never saw any. I did find a sumac, however, and one I had never recorded in my journal before. This was a Smooth Sumac, with beautiful pinky-purple smooth stems (unlike the Staghorn Sumac's, which are covered with velvety hairs) and clusters of garnet-red fruits. 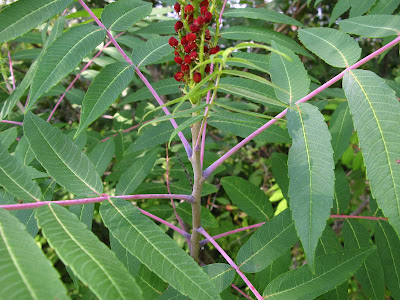 And that's about it, for botanical finds yesterday. But that wasn't the sum of the pleasures. I feel really grateful to have come to know such fascinating folks as Evelyn Greene, who knows so much and is so much fun to suffer through bogs with -- even bogs as miserable to walk through as this one was. At one point we both grew so hot and weary we settled down among the cottongrasses and cranberries, our feet and our fannies soaking up the cold water oozing up through the sphagnum mat. We talked and laughed, sharing stories about our families and of other adventures, just like any other old ladies enjoying an afternoon out. Not sitting around a tea table, though, but hunkering down in a bog. What fun!
Posted by Jacqueline Donnelly at 8:53 PM

Oh, my word - I love the color of that mushroom! And yes, I can see how it would be a fun time, despite the discomforts.

Hi Jackie- I did receive your e-mail message a few weeks ago about not being able to comment on my blog- I think it probably has to do with how I set up the comment feature- mine is different from your blog. Anyways, I enjoyed this post, I just don't meet a ton of people that are willing to do what needs to be done to find rare plants, and you know what needs to be done!

Hello, Woodswoman and Tom. Thanks so much for stopping by with your comments. It's really true that the thrill of the hunt outweighs the discomforts of slogging through bogs. And another thing: we usually have the place all to ourselves, no struggling to deal with the crowds!

If the weather was anything like I was enjoying in Maine, you have my sympathies! But what wonderful delights!

If you have some more bog slogs coming up, let me know! :D