Some Girls Know How to Have Fun

Chilly and damp today, but that didn't dampen Ellen's and my plan to walk around Moreau Lake. Ellen lives way up in Newcomb, where she writes the wonderful blog Adirondack Naturalist, but every so often she comes down to Glens Falls for shopping and auto service. So we met there today and took off together to Moreau Lake State Park while her car underwent repairs.
Even under a cold grey sky the lake shore was lovely, with white clouds of Shadblow drifting out from the edge of the woods. Along the banks, Highbush Blueberry shrubs were studded with bright pink sputniks of buds, and Trailing Arbutus still held a few little fragrant clusters of white and pink waxy blooms. A noisy pair of Canada Geese came surfboarding down on the lake, while a Wood Duck went hooting across the water and a pair of Mallards blithely bobbed on the waves. We met a couple who told us a Loon had been seen on the lake, but alas, we never saw it. We did, however, see swarms of tiny Mayflies flitting over the water, as well as a swirling mob of Suckers in close enough to the sandy shore that a fin stuck up out of the water. My friend Sue and I caught their spawning frenzy a few days ago (see Sue's blog Water Lily for terrific photos), but today the fish seemed a little less riotous.
All in all, a fun walk with a fine friend who knows how to enjoy an amble: meaning, we stop every few feet to take photos of flowers or drop to our knees to peer closely at mosses or pick up a stick to poke at dead fish or lift pieces of poop to smell if it's otter scat. As I said, a fine friend who really knows how to have fun.
Because the day was so dark, most of the photos I shot were blurry. But I did get a few I liked.
Ellen identified these leaves as Wild Black Cherry. I love their elegant shape, their cherry-red tinge, and the deeper red flap where the leaves join the twig. (Anybody know the botanical name for that little flap?) 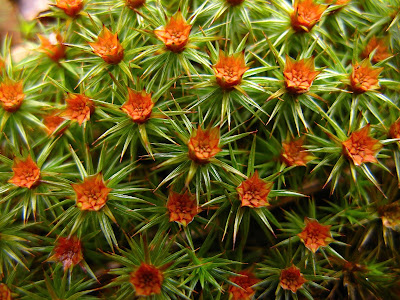 I know I posted a photo of this Haircap Moss a few days ago, but this patch was even more photogenic, those cinnamon-brown star-packed cups surrounded by bright green spikes, all so neatly arrayed. These are the moss's male shoots, where the sperm develops and is splashed out of the cups by raindrops to land on nearby female shoots.
Here are the female shoots of Haircap Moss, where the fertilized egg cells develop into spores. These spores will be contained in a capsule at the top of the stalk, which later in the year will open to spill the spores on the wind. 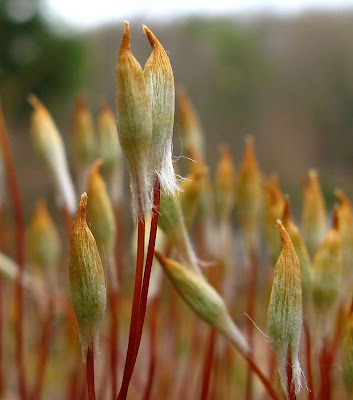 Here's a closer look at those spore stalks. Note how fuzzy and frayed they are. Do you suppose that's how this moss got its common name of Haircap? Folks once thought that this moss could be used as an agent to strengthen the hair, a use no doubt suggested by the plant's appearance. The stalks of this moss also can be woven into baskets, which must be quite lovely, considering the deep color of those stalks.
I posted a photo of Red Maple keys a few days ago, too, but that former photo didn't show the ruffled pink collar that circles the twin purplish seeds. What amazing colors! 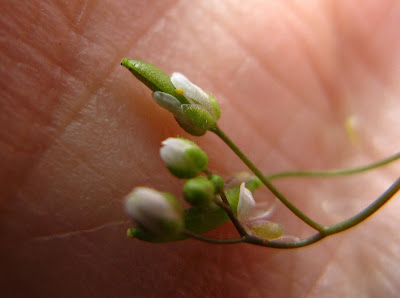 I wanted to show Ellen the patch of Whitlow Grass (Draba verna) that grows almost invisibly along a park road, but the tiny four-petaled flowers were closed up on this damp dark day. Thanks to Ellen's much sharper eyes, she noted the minute little pea-pod-shaped things protruding from many blossoms. These flowers are already fruiting.
For more photos and another account of our adventures around Moreau Lake, be sure to check Ellen's blog.

Posted by Jacqueline Donnelly at 10:34 PM

What a great review of the day! And great pics, as usual. I've downloaded mine on the new laptop, but have to wait for internet access to post them. Maybe tomorrow!

I so wanted to get out today and photograph the new blooms and shoots, but it's so cold I didn't! So! Thanks for posting yours so I can share.

I love that photo of Haircap Moss!

the little "flap" at the base of the Wild Cherry - I believe that is called a Stipule?

Thank you, friends, for your kind comments. And yes, Scotty, I believe you may be right. I had always thought of stipules as tiny little things, but having big fat red ones would be appropriate for a cherry, no?