Update on the Dead Osprey 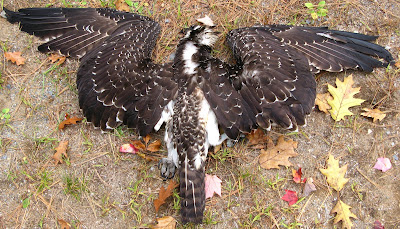 It wasn't a rifle shot, but rather the talons of another raptor that brought this Osprey down.
I heard today from Moreau Lake State Park naturalist Gary Hill, who told me that state Department of Environmental Conservation pathologists had conducted an autopsy (Correction: necropsy. See comment.) on the dead bird my friends and I found on the beach October 23. Their examination revealed that the puncture wounds on the Osprey's belly and leg were caused not by a bullet but by the talons of another raptor, possibly a Bald Eagle or another Osprey.
I confess I hate the thought of such avian animosity, but I hate the thought of the senseless shooting of birds by humans even more. So I guess that was good news, even though it still makes me sad. But I'm glad to know that the DEC folks care enough about the death of a single bird that they would make the effort to find out how it died. Thanks, you guys.
Posted by Jacqueline Donnelly at 8:55 PM

Woodswalker: Thanks for the update on this. It's timely for me too. We just had an article in the Hawk Migration News about the causes of raptor mortality, though we focused more on human-caused mortality. This is a good reminder that there are other causes, too.

With all I've read about eagles pirating fish from ospreys, I guess I'm not totally surprised by this news. As you say - it's good to learn that it wasn't some thoughtless person who did it.

Thank you sooooo sooo soo much for this update, a little bit of faith in humanity is restored in me. I'm actually kind of interested in the whole birds attacking each other thing, ospreys are certainly no small feat! I see what Ellen has written, and it makes me wonder then if my possible eagle sighting the other day certainly was one...

Ospreys are very rare here in the UK - I don't know if they are where you live also, but finding a dead osprey would absolutely break my heart. I have to say I do take comfort that it was not shot - I've never understood why anyone would shoot a bird of prey (or anything for that matter, but that's just me)