Sigh.  Best laid plans, and all that.   My plan to create a backyard wildlife preserve, complete with all-native food-bearing plants, has hit another snag.  Last winter, it was a rabbit eating the new Red Chokeberry and Sweet Pepperbush shrubs down to the ground.  This spring, it was squirrels snipping off all the Flowering Dogwood buds.  And now it's Viburnum Leaf Beetle larvae (Pyrrhalta viburni) infesting my Highbush Cranberry (Viburnum trilobum) shrubs. 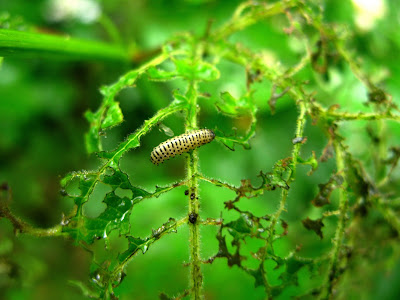 Small larva, big appetite!  This is what's left of my Viburnum trilobum leaves.
I saw the tiny dark larvae on the backs of some pin-holed leaves a couple of weeks ago and I naively thought, Oh good, here are some wormy-like critters for mama and papa birds to feed their babies.  Little did I know that birds don't like these larvae.  Or at least, they don't recognize them as food.  These insects (as I learned by Googling "viburnum insect pests") are twentieth-century immigrants from Europe, not arriving in New York State until 1996.  But by now they've spread all across the country, and their favorite foods are our native viburnum species:  Arrowwood, Maple-leaved, Nannyberry, and others, especially Highbush Cranberry.  And boy, did they eat mine up!  Most of the leaves are completely skeletonized, with just a few nibbled ones left on top: a little something for the adults to snack on after these larvae pupate in a couple of weeks.  The larvae are now bigger and fatter, yellowish spotted with black, and of course with bigger mouthparts.
I called the nursery where I purchased these shrubs last year, and they said I could use a systemic insecticide that would kill not only these larvae but also the emerging adults.  And what about ants and bees and native beetles who visit the shrubs?  Oh, well, yes, those too.  So that's out.  The whole point of planting these native species was to avoid pesticides.  There are other, less effective, strategies for battling this beetle, ones that require several years of vigilance and buying bags of ladybugs, but I'm just going to bag up these bushes and pull them out of my garden.  Phooey!  Darn it all!  Dang!
Black Cohosh is also called Bugbane.  Let's hope no bugs find it tasty, too.
Happily, my friend at Wildthings Rescue Nursery has provided me some consolation: two Black Cohosh plants (Cimicifuga racemosa), which will grow to be nearly eight feet high at maturity and fill in where I pulled the viburnums out.  Their tall snaky flower stalks are fleecy and white and seem to glow in the shadows, earning them the nickname "Fairy Candles." They're also called "Bugbane," producing an unpleasant odor (up close) that's supposed to ward off bugs.  Let's hope!!!  Let's also hope they don't stink too much, although these ones I photographed at Yaddo last summer didn't seem to smell so bad.
Pretty Canada Anemones will help fill in where I pulled the viburnums out.
I also bought some Canada Anemones, some Celandine Poppies, two darling Birdsfoot Violets, and the nursery threw in one Great Willow Herb, for which I will have to find a sunny spot.  And so we move on.  Bye-bye viburnums.  Let's hope you evolve some immunity to these awful bugs someday.  Or some predators discover how tasty Viburnum Leaf Beetles are.
Posted by Jacqueline Donnelly at 7:53 PM

I have a beautiful arrowwood bush in full bloom without any bugs or creepy crawler things bothering it. I have also made cuttings last year and those are growing this spring. I would really hate to lose it.

We bought our property in 1962 and it was all new and no sod in back and no fishworms. Since then I have been working in different ways to create a wildlife sanctuary and habitat in the middle of town on a very small lot.

I began first by attracting birds of all kinds -- from hawks to doves and those are still here after some 46 years. I also wanted squirrels and rabbits and groundhogs and raccoons and chipmunks to come, stay or just visit. And they all came, some stay longer than others and some move on. I also began taking photos and the numbers are over 80,000.

Lately, I have been on a quest to replace all lawn grass and sod with everything from clumping bamboo to clover and perennials. And it is a slow process but seems to be working.

I think if you attract the wildlife first that they will, for the most part, take care of the bugs.

My birds are on My Birds Blog
My hawks are on my Coopers Hawk Blog
And most can be seen or are linked from brookvilledailyphoto.blogspot.com

What a pleasure to make your acquaintance, Abe! I looked over your many blog sites and was amazed by the beauty and quality of your work -- and delighted by how your personality shines through it all! I look forward to many more visits.

Watch your arrowwood carefully, and seek information about this European Viburnum Leaf Beetle. Our native birds don't seem to recognize it as food, and it just loves our native viburnums because they have not evolved any defenses. Many exotic varieties are resistant, but I want only natives. It's ironic that I chose native viburnums for the very reason that they could co-exist with our native bugs. This pest is not a native.

I have lots of wildlife in my inner-city tiny (40 x 20) backyard. Lots of birds, including both Cooper's and Sharp-shinned hawks, a dozen squirrels on a regular basis, and one hungry rabbit who loves baby shrubs for supper. We also have an occasional possum and we used to have hordes of raccoons, but a rabies epidemic killed nearly all in our county some years back. Our area bats are in desperate trouble this year with a terrible fungal disease. I used to always see them flitting over the yard at twilight.

My goal with my tiny lawn is to allow the edge plantings (all perennial natives) to move into the grass as much as they will. My mowed lawn hosts violets, speedwell, ground ivy, strawberry, cinquefoil, and clover as well as a little grass. And too much Bishop's Weed, which worms in underground from the neighbor's.

I've lived in dread of getting VLB here, but so far we've been lucky. Instead, however, I have rose chafers, which are almost as damaging. They eat not only the leaves, but do in the flowers as well, meaning I get very few fruits on my arrowwood, my currant, and my grapes. Grrrrr.